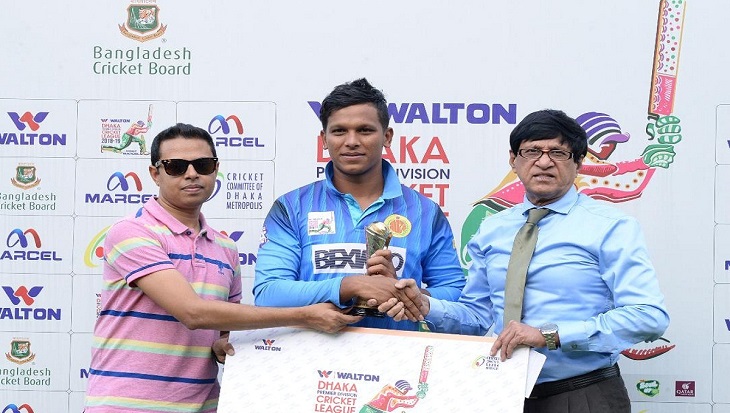 While Sheikh Jamal are not in the race of the championship, Rupganj and Abahani have strong chance to clinch the title.

In the match between Abahani and Prime Bank Cricket Club, the former came up victorious by six wickets at Sher-e-Bangla National Cricket Stadium here.

Abahani won the toss and sent Prime Bank to bat first. They accumulated 226 all-out in 49.3 overs.

They lost the first wicket before posting anything on the board when Anamul Haque, the captain of Prime Bank, fell in the first ball of the innings. Prime Bank lost the second wicket in seven runs.

They lost four more wickets before reaching the 100-run mark. However, two superb knocks from Alok Kapali (80) and Nayeem Hasan (51) guided them to 226.

For Abahani, all-rounder Mohammad Saifuddin bagged five wickets conceding 32 runs in 9.1 overs. It was his second five-wicket haul in three matches. Apart from Saifuddin, Mashrafe Bin Mortaza and Soumya Sarkar were successful with the ball as both of them took two wickets each.

While replying, Abahani chased the target in 44.4 overs. They scored 228/4 with the help of Wasim Jaffer (64) and Najmul Hossain Shanto (77). However, Soumya, who recently made it to the World Cup squad of the Tigers, failed to impress. In this match, he fell for a duck in two balls.

Mohammad Saifuddin was awarded the man of the match for his five-wicket haul.

In the other match between Legends of Rupganj and Prime Doleshwar Sporting Club in Savar, Rupganj won by seven wickets.

Prime Doleshwar won the toss and batted first but failed to live up to the expectation as they tumbled for 205 all-out in 45 overs.

Shykat Ali (72), Saif Hassan (37) and Taibur Rahman (27) showed some strength against Ruganj's bowling attack. The other batsmen of Doleshwar disappointed.

For Rupganj, Taskin Ahmed took four wickets conceding 54 runs. The right-arm pacer was recently overlooked in the World Cup squad of the Tigers which made him cry. Besides, Mohammad Shahid bagged three wickets while Rishi Dhawan took two for Rupganj.

In reply, Rupganj lost the first wicket without any run on the board. However, Shahriar Nafees smashed his ninth List-A ton and guided the team to seal the game. Nafees ended with unbeaten 113 with 11 fours and one six. Apart from him, Mehedi Maruf posted 41 and Naeem Islam remained unbeaten on 32.

Rupganj ended with 208 for three wickets and won the game by seven wickets. Winning this game, Rupganj secured 24 points which is two more than that of defending champions Abahani. Shahriar Nafees was the man of the match for his hundred.

In the other match, Sheikh Jamal beat Mohammedan by seven wickets in Fatullah.

Sheikh Jamal won the toss and bowled first. They restricted Mohammedan to 159 all-out in 44.4 overs.

Tushar Imran hit 56 for Mohammedan but the other batsmen displayed disappointing performance in the middle. Liton Das and Mohammad Ashraful posted 26 and 21 respectively as well.

In reply, Imtiaz Hossain (54) and Nurul Hasan (83) hit fifties and sealed the victory for their team.

Nurul Hasan, the captain of Sheikh Jamal, was the man of the match for his knock of 83.