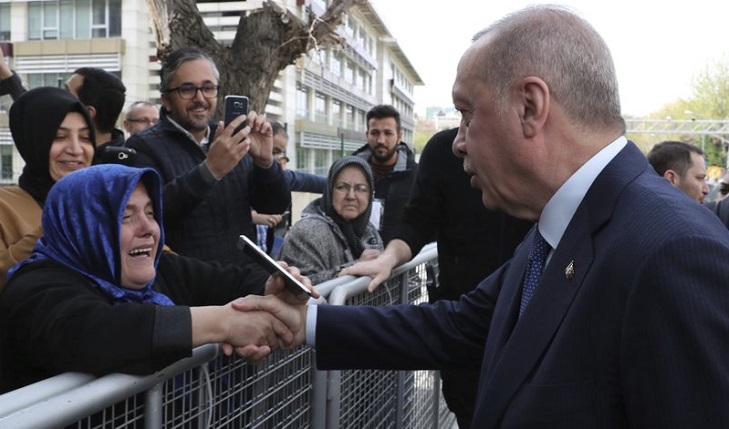 Presidential spokesman and senior adviser Ibrahim Kalin told a news conference he couldn't be certain that the waivers would be granted. But, he said Turkey had made a strong case that should be heeded.

Waivers for Turkey could set the White House on another collision course with Congress over foreign policy. Iran hawks in Congress and elsewhere have been angered by waivers that followed Iran sanctions, arguing that they hurt the administration's "maximum pressure" campaign on Tehran. And senior lawmakers from both parties have come out in strong support of sanctions if Turkey purchases Russian missile systems.

The United States re-imposed sanctions on Iran, including on its energy sector, in November after President Donald Trump pulled out of the landmark 2015 Iran nuclear deal. At the same time, it issued waivers allowing Turkey, six other countries and Taiwan to continue purchases to avoid roiling oil markets and to lessen the economic blow.

"We are expecting an extension for Turkey," Kalin said. "We have made it clear we would like to continue to buy Iranian oil. People should not expect Turkey to turn its back on Iran just like that."

The waivers allowing Turkey and others to import Iranian oil expire early next month. U.S. officials have said that three of the eight waivers won't require extensions when they expire on May 2 because those recipients have already eliminated their imports of Iranian oil. But they have refused to say whether any of the other five will be extended.

Kalin also said Turkey wants a waiver for sanctions that will likely be triggered should it take delivery of Russia's advanced S-400 missile defense system over Washington's objections.

Turkey's purchase of the S-400 has created a deep rift between the NATO allies, with U.S. officials warning of significant consequences if it is finalized and Turkish officials saying it's a done deal that won't be cancelled.

Kalin said Erdogan and other Turkish officials have been pressing Trump to use a presidential exemption to spare Turkey from sanctions under legislation known as the Countering America's Adversaries Through Sanctions Act, which is aimed in part at Russia's defense industry. The exemption allows Trump to bypass the mandated sanctions should he determine it is in U.S. national security interests to do so.

"If it comes to it, of course we would expect President Trump to use his waiver," Kalin said. He stressed that he could not speak for Trump or other U.S. officials but said that Trump had promised Erodgan that he would personally look into the situation. Kalin said he expected delivery of the S-400 system to be completed within 2 to 3 months.

In addition to the sanctions, the Pentagon and State Department have said the S-400 purchase will jeopardize Turkey's participation in the U.S. F-35 fighter aircraft program. U.S. officials say Turkey's use of the Russian surface-to-air missile defense system would be a threat to the F-35 program and have already suspended some aspects of Turkey's participation.

Kalin said Turkey was hopeful the U.S. would agree to a Turkish proposal to set up a technical committee to review possible security threats posed by the S-400.

Kalin spoke to reporters at the Turkish Embassy as he wrapped up a trip to Washington with other senior officials in Erdogan's government, including the ministers of defense, finance and trade.

In addition to their meetings with U.S. officials including Treasury Secretary Steven Mnuchin, acting Defense Secretary Patrick Shanahan and Trump's senior adviser and son-in-law Jared Kushner, the officials all spoke at the American-Turkish Council's annual conference on U.S.-Turkey relations. The conference was held at the Trump International Hotel.

Shanahan met Turkish Defense Minister Hulusi Akar for about 40 minutes in the Pentagon on Tuesday, according to Defense Department officials. The meeting touched on all the ongoing areas of debate between the two nations, including Turkey's plans to buy the Russian S-400 and the continuing fight against Islamic State militants in Syria, they said.

Acting chief Pentagon spokesman Charles Summers Jr. said Shanahan and Akar "focused their discussion on interests, rather than positions, and on the importance of U.S.-Turkish cooperation" in gaining security and prosperity for both nations and the region.