Nusrat’s Murder and Our Shame 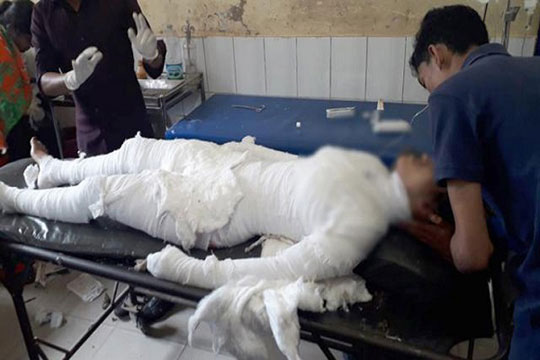 I was taken aback when I first came to know that a madrasa student, named Nusrat, was set on fire by unidentified miscreants in Sonagazi Upazila, Feni when she entered the madrasa to sit for Alim examination. According to the family members of the victim, the miscreants were the supporters of SM Siraj-ud-Daula, the Principal of the madrasa, who was accused of his effort to molest Nusrat a few days ago. Based on a formal complaint filed by the family members of the victim on March 27, the police conducted an investigation and found some degrees of truth. Thus, the police arrested the principal and sent him to the district jail. The origin of the heinous act was deeply rooted in the complaint of Nusrat’s family against the principal.

The demise of Nusrat has not only brought the issue of harassment against women and children in the forefront of discussion but also put us in such a situation from where we could only feel ignominy for such brutality. This incident has raised a number of questions that need to be addressed not only by the government but also by the people of the country. First: Can the guardian feel secure when they send their girls to the educational institutions where there are rapists like Siraj-ud-Daula. From our childhood, we have grown up with a feeling that the teachers are like our parents who look after their students like their own children. But, the miscreant like Siraj-ud-Daula has pushed the whole teaching community to a reprehensible situation.

Second: The issue of security of the examination centre has come under serious question. Despite the presence of police at the entrance of the madrasa, how a number of people with kerosene oil could enter the examination centre has been discussed among the countrymen. Third: The role of the local police in pursuing the case and perpetrators has also come under the spotlight as Nusrat’s family did not receive any security from the local police, despite the fact that they placed their request for security to the local police and administration well before Nusrat was set ablaze. The government’s decision to withdraw Sonagazi model police station’s OC Moazzem Hossain to transfer him to the Armed Police Battalion (APBn) indicates that they were some degrees of negligence on the part of the local police. Thus, all policemen who remained involved in this process must be brought under the trial.

The incident of Nusrat has touched the core of hearts of the majority of the people. The cruel nature of brutality made us cry. The print, electronic and social media deserve thanks for creating a social movement that touches the mind of the majority of the people irrespective of class, creed and religion. Like Nusrat, hundreds of women and girls are getting harassed and tortured all over the country every day. But, many of such incidents are not coming in broad daylight due to local pressure and negotiation. In those cases, the victims are getting deprived of justice. Unfortunately, the people of the country do not have anything to do other than expressing their condolence to the family members of the victims.

Despite the trepidations of the majority of the people, I feel shame when I witnessed some of the madrasa students to stage demonstrations and human chains for the release of the rapist from imprisonment. Several newspaper sources have indicated that the principal could manage to motivate a local support group exercising his power what was derived from a local syndicate. This is not an isolated incident in the country. Rather, a teacher like Siraj-ud-Daula with the help of such syndicate is exploiting their students all over the country. Thus, initiatives are required to break all the syndicates associated with educational institutions.

The enormity of the Nusrat’s incident is so grave that it again has brought the issue of exploitation of women and children at the forefront of discussion all over the country. Of course, the government has streamlined the legal framework to carry trials against sexual harassment. At the same time, there are hundreds of instances where the law enforcement agencies are found to pay very little or no attention to the issue of the protection to the victims. In case of Nusrat's incident, her family members have demanded a probe into OC’s role in the whole affair as they claimed that he was trying to protect the culprits, including Siraj-ud-Daula and his cohorts since the arson attack. Family members have also claimed that the police made some changes to the FIR that was filed after two days of the incident. On the other hand, the lengthy legal process sometimes creates a sense to apathy among the family members of the victim who lose interest to carry the process of the trial forward. Thus, the miscreants are getting freed in the course of time.

Our Prime Minister deserves appreciation for instructing the hospital authority to do whatever they could to save Nusrat and law enforcing agencies to find the culprits and bring them under the trial. But, at the same time, we will have to think why the Prime Minister would have to intervene in every single case, despite the existence of law enforcers and appropriate authorities. Doesn’t it indicate that the government machineries are not discharging their responsibilities properly? Thus, the government should take a strong stand to punish those who would show negligence in discharging their responsibilities. Only then, the administrative arms of the government would work in the right direction.

At the same time, the government must ensure that all culprits are brought under the due trial and be punished without considering their political identities. It has already come out in different newspapers that the accused principal has close allies with some of the influential members of the governing council of the madrasa who are government officials and local ruling party elites. Thus, they must ensure that a fair trial would be carried to punish all involved in the incident of Nusrat irrespective of their position and political affiliation.

Finally, whatever Nusrat’s family has lost could not be compensated. But, they could heave a sigh of relief if they could see that the real culprits have been brought under the trial and executed. The government should consider carrying these trials under the special tribunal act. If the miscreants could be given exemplary punishment within the shortest possible time, we would be able to save many Nusrat in the upcoming days. At the same time, a social movement needs to be organised in order to change the outlook of the people in society towards women and girls. We all should accept the fact that women and girls should not be considered as a piece of amusement. Rather, we all should view them as human beings. The government should also incorporate such lessons in the curriculum at all levels. Only then, we will be able to show some respect to the departed soul of Nusrat and beg an apology for not being able to save her life.