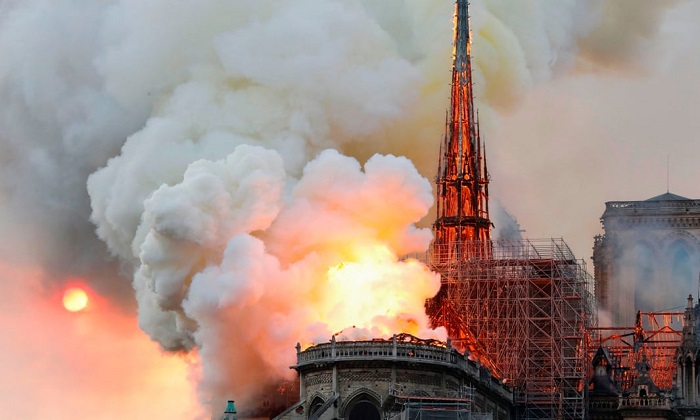 Thousands of Parisians watched in horror from behind police cordons as a ferocious blaze devastated Notre Dame Cathedral, destroying its spire and a large part of the roof.

Firefighters battled to contain the fire, which began at around 6pm on Monday. An investigation has been opened by the prosecutor’s office, but police said it began accidentally and may be linked to building work at the cathedral. The 850-year-old gothic masterpiece had been undergoing restoration work.

The French president, Emmanuel Macron, attended the scene and later gave a speech in which he vowed that the cathedral would be rebuilt, as fire crews said the landmark’s rectangular bell towers and structure of the building had been saved.

Macron said “the worst had been avoided” thanks to hundreds of brave firefighters who battled for hours and who would continue working through the night. One firefighter was severely injured but no other casualties were reported.

“What happened tonight in Paris, in this cathedral, is a terrible event,” the president said, vowing to raise funds worldwide and bring the best talents from around the world to reconstruct the building in its entirety.

“Notre Dame is our history, our literature, part of our psyche, the place of all our great events, our epidemics, our wars, our liberations, the epicentre of our lives ... So I solemnly say tonight: we will rebuild it together.”

Thousands of Parisians – many weeping and some praying – watched as vast orange flames soared from the roof for hours, threatening one of the greatest architectural treasures of the western world. There were gasps on the southern bank of the river Seine as locals watched fire sweep across the roof, which slowly caved in.

The 12th-century cathedral is home to priceless works of art and is one of the world’s most famous tourist attractions, immortalised in Victor Hugo’s 1831 novel The Hunchback of Notre Dame. It attracts about 13 million visitors a year from around the world.

“We consider the two towers of Notre Dame to have been saved,” the Paris fire-service commander Jean-Claude Galler said at around 11pm, as firefighters were still working to contain flames. The fire service said the fire had been reduced and it was a major accomplishment by hundreds of firefighters that the flames were stopped from spreading to the north tower belfry. However, the roof “had been ravaged”, with around two thirds destroyed.

Fire brigade officers, who were preparing to spend the night attempting to cool the building, said the structure of the cathedral was “saved and preserved”. A spokesman said there was still a risk that scaffolding in the heart of the building could collapse.

The wooden frame at the top of the 13th-century landmark was made from so many oak beams that it was known as “the forest”. That wood proved so combustible, the Paris fire service said, that it there was a danger to firefighters.

Smoke billowed into the sky, visible from across the city, and ash fell in the surrounding area.

The cathedral and surrounding buildings were evacuated and police closed several metro stations and cordoned off roads by the river.

On the left bank of the river Seine, thousands of onlookers gathered at police cordons watching as the flames burned high into the clear blue sky. As part of the roof gradually collapsed in flames, bangs and crackles could be heard from the street. Some people sang Catholic liturgies as they watched. Others sank to their knees. Many were in tears.

Camille, 20, from Normandy, a history student at the Sorbonne, watched as flames blazed through the frame of one of the cathedral’s smaller stained glass windows. “There’s a feeling of total sadness and also anger,” she said. “It’s our heritage. Whether you’re Christian or not, part of our history is going up in smoke.”

Alexis, 35, a finance worker, had hurried to the scene after seeing the first images on the television news. “I rushed down. I never thought it would be this depressing,” he said. Over the course of an hour, he watched as the flames spread across the roof and sections of it slowly collapsed.

A 55-year-old furniture restorer, who did not wish to give his name, said: “This is a major moment,” he said. “This building is a symbol of Catholicism. It’s a symbol of Paris.”

Paris’s deputy mayor, Emmanuel Grégoire, said emergency services were trying to salvage artwork and other priceless items stored there. “There are a lot of artworks inside ... it’s a real tragedy,” the city’s mayor, Anne Hidalgo, told reporters at the scene.

On the north side of the cathedral on the Île Saint-Louis, more crowds had gathered. “It’s a national tragedy,” said Paul Rechter, who lives barely 100 metres from the cathedral. “It’s a symbol of France that is collapsing there, part of our national identity going up in smoke. Part of our history, our culture, our literature ... How on earth could it have happened? Why were there no precautions?”

His wife Agnes said her parents and grandparents had lived on the Île Saint Louis and the Île de la Cité. “We have known the cathedral since childhood,” she said. “It’s part of our personal history, too.” She said she thought most of all of “the centuries of work, of craftsmanship, that went into that building ... The number of men who have worked on it down the years.”

Pierre Mesnage, 44, who has lived on the Île de la Cité for the past 20 years in an apartment that overlooks the cathedral, said: “I cried when I saw it, honestly. I wept. I see that building every single day, all day if I’m at home. It’s a drama. A personal and a national tragedy. I’m a Catholic, too, so there’s an added significance. I really don’t understand how it could happen. This is an emblem of Paris, an emblem of France. Why wasn’t it protected?”

Ruud van der Leij, a computer studies teacher from Rotterdam, said he had been staring at the flames for more than two hours. “You can’t look away,” he said. “It’s awful and fascinating at the same time. A terrible, awful, sad affair. Such a symbol.”

Marina Valleix, 42, said she had come specially from her home in the 19th arrondissement of Paris. “I do treasure hunts with clues, for children, round the big Paris monuments,” she said. “I’m here more or less every weekend. I had to come and see.”

The disaster “has got to me, definitely”, she said. “I’m confident it will be rebuilt, and I know Notre Dame has already burned, the spire has already fallen in the past. I know we can and will rebuild. But still, it’s sad. To see it like this, it’s terribly sad.”