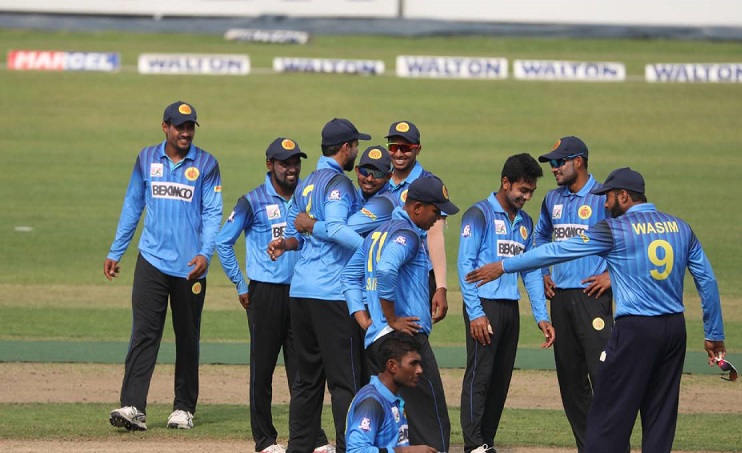 Defending champions Abahani beat Prime Doleshwar Sporting Club by 165 runs on Monday in the first round of the Super League of Dhaka Premier Division Cricket League.

Abahani batted first in the match after losing the toss and were all-out for 251 in 49 overs.

They lost three wickets in 12 runs. Abu Jayed Rahi bagged the first two wickets, while Farhad Reza scalped the other one.

In reply, Doleshwar capitulated for 86 all-out in 29.4 overs. Saifuddin was explosive with the ball, removing Imran Uzzaman in the first over of the innings. He bagged four more wickets.

It was Saifuddin’s best bowling figure in List-A career.

With the hard-fought 27 off 65, Mahmudul Hasan was the highest scorer for Doleshwar.

Saifuddin was adjudged the man of the match.

In the other match in Savar, Legends of Rupganj beat Mohammedan Sporting Club by 46 runs.

In reply, Mohammedan tumbled for 267 all-out in 46.2 overs and suffered loss in their first Super League match. Irfan Sukkur and Raqibul Hasan scored 73 and 58 respectively for Mohammedan.

Naeem was awarded the man of the match.

In the other match at Fatullah, Sheikh Jamal Dhanmondi Club won against Prime Bank Sporting Club by six wickets relying on the century of Nasir Hossain. The right-handed all-rounder smashed unbeaten 112 off 110 with 12 fours and three sixes.

Sent to bat first, Prime Bank lost the first wicket in the first ball as Anamul Haque suffered his third golden duck of the season. He fell prey to Khaled Ahmed.

Despite controlling the initial damage, Prime Bank lost five wickets while going to 131 from 121.

Coming in to bat at number eight, Ariful Haque posted 74 runs for Prime Bank and helped his team pass the 200-run mark. Eventually, they ended up with 236 all-out in 48.3 overs.

In reply, Nasir struck his seventh List-A ton, and along with him, Elias hit 67 to ensure a win for Sheikh Jamal. They reached the target in 48.4 overs (239/4).

Elias Sunny was adjudged the man of the match.