Messi rested for United as Barcelona held by Huesca 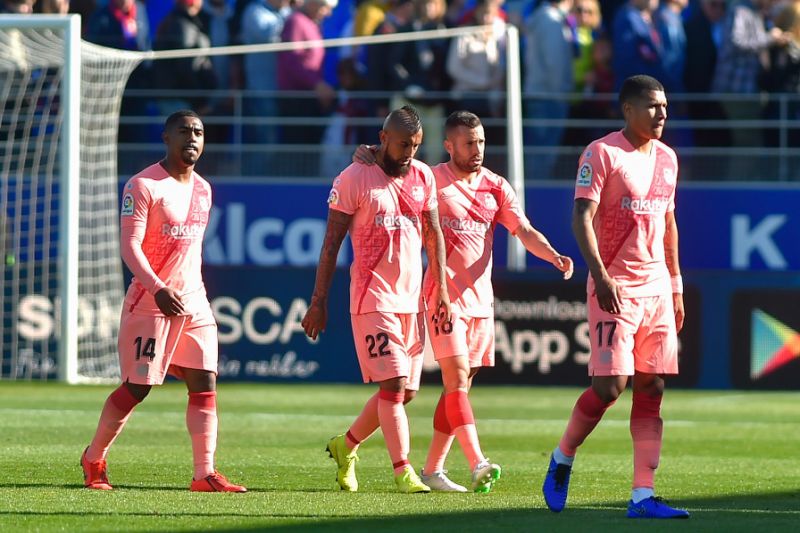 Lionel Messi was left out and Gerard Pique watched on television with a bowl of prawns as Barcelona saved themselves for Manchester United by resting 10 players against Huesca on Saturday.

Goalkeeper Marc-Andre ter Stegen was the only one to keep his place for the goalless draw at El Alcoraz as coach Ernesto Valverde prioritised progress to the Champions League semi-finals after their 1-0 first-leg win at Old Trafford in midweek.

"Obviously we always want to win but it's true this game came in slightly different circumstances," Valverde said.

"It is an unusual week because we come from playing an intense match on Wednesday, when the trip was long, and we have the return on Tuesday.

"Considering the schedule and our advantage in the league, I thought it was time to make changes."

Messi was left out of the squad completely while the suspended Pique posted a picture on social media of him watching the game on television, in front of him a large bowl of seafood.

The draw gives Atletico Madrid the chance to reduce the gap at the top of the table to nine points if they can beat Celta Vigo at home later on Saturday but, with six games left after this weekend, the difference is likely to prove irrelevant.

For Huesca, who are bottom of the table in their first-ever season in Spain's top flight, a hard-earned point means they sit five adrift of safety, albeit having played a game more than those immediately above them. Their survival bid remains unlikely but alive.

Malcom came closest to a winner, his shot hitting the post, but Huesca were good value for the draw and could even have snatched victory themselves in the second half.

Messi left Manchester with a swollen nose and cheek on Wednesday after a clattering challenge from Chris Smalling but there is little concern about the Argentinian being fit for the return game at Camp Nou.

Barca's huge advantage at the top of La Liga has afforded them the luxury now of prioritising success in Europe, the only issue perhaps for Valverde the small matter of maintaining momentum.

Overall, they were better than Huesca but never really got out of second gear.

Like Pique, Luis Suarez was also banned while Ivan Rakitic, Sergio Busquets and Clement Lenglet were among those rested.

Ousmane Dembele came in after recovering from a hamstring injury and, after playing 67 minutes, his chance of a start next week would appear enhanced.

Dembele came closest to a goal in the first half after a brilliant reverse pass from the talented Riqui Puig, one of a number of youngsters given a chance to impress.

Another was Jean-Clair Todibo, who saw a header saved while Kevin-Prince Boateng, also handed a rare outing after his arrival in January, was unable to connect with a low Dembele cross.

Huesca had their moments as Enric Gallego burst through but shot wide and then he wanted a penalty after Ter Stegen slid through the back of his legs to claim the ball.

Malcom struck the post with a fizzing drive but despite Jordi Alba, Philippe Coutinho and Arthur Melo all coming on in the second half, Barca could not find a way through.