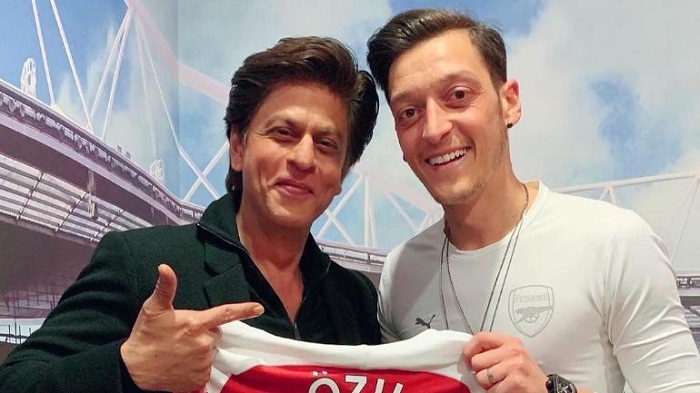 A self confessed sports enthusiast, Shah Rukh Khan is not only the owner of IPL team Kolkata Knight Riders, he is also a die-hard football fan. The actor was recently in London to witness Arsenal beat Newcastle at the Emirates Stadium in the city.

After the match, the actor clicked pictures with German footballer Mesut Özil, who plays for Premier League club Arsenal, and his fiancée, Swedish model-actor Amine Güle.

The actor shared pictures from the meeting on his social media handles and wrote, "What a lovely evening @arsenal congratulations. Thx @m10_official & @gulseamine for your warmth love & hospitality. See u guys soon in India."

After defeating Newcastle, Ozil’s team has jumped to the third place in the Premier League.

Arsenal's Mesut Özil is a big fan of Shah Rukh Khan and invited him to the match. Accepting the invitation, King Khan not only watch the match but also met the star footballer and his fiancée.

In the past as well, many renowned personalities from around the world have shown their admiration for the king of Bollywood. International celebs including Coldplay’s Chris Martin, Leonardo Di Caprio, Zayn Malik and Hugh Jackman, among others, have accepted to be his fan.

On the other hand, Shah Rukh Khan has also expressed his love for football a number of times. During FIFA World Cup 2018, the actor shared his excitement while watching the games and also posted about how his blood pressure’ was tested by his favourite teams.

On the work front, Shah Rukh Khan was last seen in Aanand L Rai’s Zero which failed at the box office. It also starred Anushka Sharma and Katrina Kaif in pivotal roles.