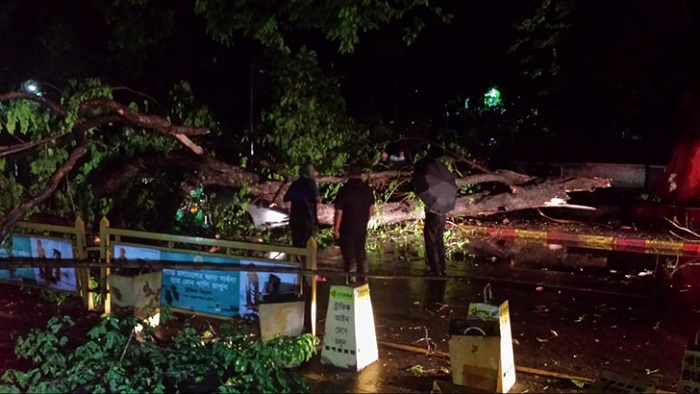 At least three people were killed as a nor'wester coupled with hailstorm and rain swept the capital on Sunday evening.

The victims were identified as Md Hanif, 50, a tea vendor of Paltan crossing, Mili de-Costa, 62, a resident of Monipuripara, and Md Dulal Mia, 40, a driver by profession, reports UNB.

The women died after a tree fell on her at Lake Road around 6:30pm, said Jan-e-Alam Munshi, officer-in-charge of Sher-e-Bangla Nagar Police Station.

The tea vendor died after several pieces of brick fell on him from a nearby multi-storey building around 6:15 pm, said sub-inspector Md Sujon of Paltan Police Station.

He was taken to Dhaka Medical College Hospital where doctors declared him dead around 6:50 pm.

Meanwhile, driver Dulal Mia died on the spot around 6:45 pm when a portion of an extended structure of a multi-storied building fell on him while he along with another driver were staying inside a tin-shed makeshift in West Shewrapara, said Dadan Fakir, officer-in-charge of Mirpur Police Station.

The tropical storm, the first of the season, hit the capital around 6:15 pm and lasted for a few minutes, according to the Met Office.

It recorded a wind speed of 74 km per hour and 17 mm of rain during the storm, said Meteorologist Bazlur Rashid.

The sudden rain caused a widespread traffic chaos in the city, inflicting sufferings on those returning home from their offices.

UNB’s Manikganj correspondent reports that ferry and launch services on the Paturia-Daulatdia route in the Padma River were suspended due to the sudden stormy weather in the afternoon.

Zillur Rahman, assistant general manager of Bangladesh Inland Water Transport Corporation (BIWTC), said the authorities suspended the water transport services on the route from 5:40 pm due to the bad weather.

A total of 16 ferries and around 400 vehicles remained stuck on both sides of the river, said the official adding that the services will be resumed once the weather condition improves.

The latest Met Office bulletin said rain/thundershowers accompanied by temporary gusty/squally wind is likely to occur at many places over Rangpur, Mymensingh, Dhaka, Chattogram and Sylhet divisions, and at a few places over Khulna, Barishal and Rajshahi divisions with hails at isolated places.

Rain or thundershowers may continue for the subsequent two days.