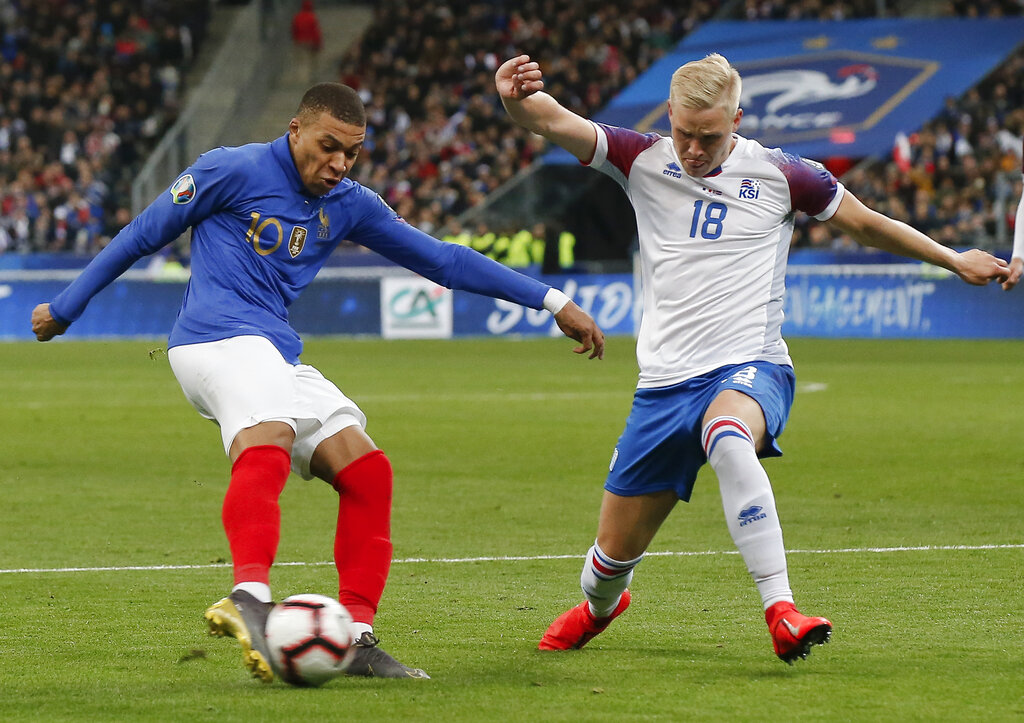 World champion France fully capitalized on Iceland's defensive deficiencies and lack of imagination to demolish the North Atlantic nation 4-0 in qualifying for the 2020 European Championship on Monday.

France had the upper hand in all areas and could have scored more in the second half if not for its forwards' profligacy in front of goal.

Defender Samuel Umtiti scored the opener in the first half and Olivier Giroud, Kylian Mbappe and Antoine Griezmann completed the win after the interval.

The team that beat Moldavia 4-1 over the weekend was unchanged. Giroud, Mbappe, Griezmann and Blaise Matuidi started up front in a 4-3-2-1 system.

Iceland played cautiously with a deep defensive line but could not soak up the pressure. France took the lead after 12 minutes when Mbappe found Samuel Umtiti with a fine cross from the left headed home by the center back, who was unmarked in the box.

Giroud came close to making it 2-0 six minutes later but his header from close range was tipped over the bar by goalkeeper Hannes Halldorsson, and Mbappe fire a low shot inches wide after a sudden burst of speed left defenders frozen in the 25th.

Iceland, which has only one win in its past 17 games, struggled to move the ball outside its own half and its sole chance of the first half came from a set-piece.

After the break, Benjamin Pavard, Griezmann and Matuidi, fluffed attempts at goal.

Giroud then scored his 35th international goal to become France's outright third highest-scoring player ahead of David Trezeguet, making the most of a botched clearance from Halldorsson to poke the ball into the net with his thigh.

Mbappe made it 3-0 with a clean finish in the 78th after collecting a subtle through ball from Griezmann, who completed the rout six minutes from time on the break. Griezmann was set up by a splendid backheel from Mbappe with his back to defenders.

In other Group H matches, Turkey crushed Moldovia 4-0, and Albania won 3-0 at Andorra. With two wins in as many games, France leads the group level on points with Turkey.