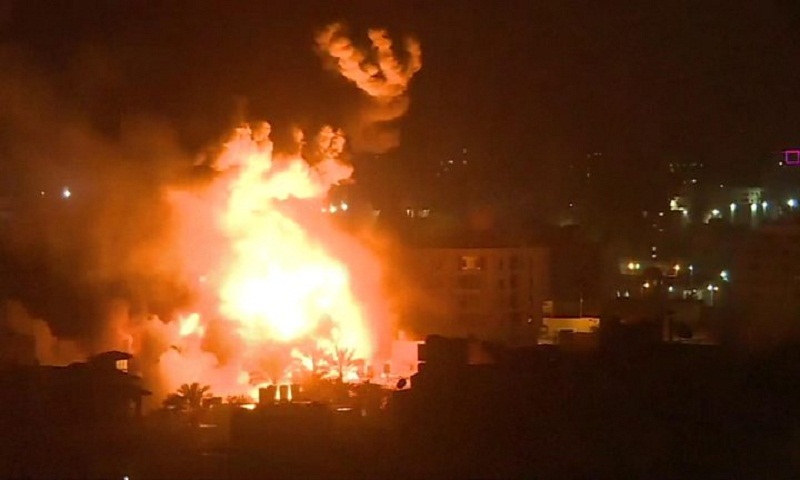 Israel has carried out strikes on Hamas targets in the Gaza Strip, hours after a rocket hit a house north of Tel Aviv.

The Israel Defense Forces (IDF) said the office of Hamas's political leader and the group's military intelligence headquarters were among the targets.

The IDF earlier blamed Hamas, which controls Gaza, for the launch of the rocket that hit the Israeli community of Mishmeret, injuring seven people.

"Israel will not tolerate this, I will not tolerate this," Israeli Prime Minister Benjamin Netanyahu told reporters during a ceremony in Washington at which US President Donald Trump formally recognised Israeli sovereignty over the occupied Golan Heights, which Israel captured from Syria in the 1967 Middle East war.

Mr Trump denounced the attack as "despicable" and said the US "recognises Israel's absolute right to defend itself".

So far no Palestinian militant group has said it fired the rocket. One unnamed Hamas official said it had "no interest" in doing so.

What is the latest?

By 22:00 local time (20:00 GMT) on Monday, Hamas officials were telling news agencies that a ceasefire had been reached with the help of Egyptian mediators.

Israel did not comment on the claims. The IDF tweeted later on Monday evening that "dozens of rockets" were being fired towards Israel.

What happened on Monday morning?

A rocket launched from the Rafah area in southern Gaza hit a house in Mishmeret, about 120km (75 miles) to the north, causing severe damage to the building and setting it on fire.

The IDF and Hamas's Al-Aqsa TV said the office of Hamas political leader Ismail Haniya in Gaza City's Rimal district was bombed. It was not clear whether he was inside at the time.

The IDF also said its fighter jets targeted the offices of Hamas' Internal Security Service, as well as a three-storey building in the Sabra district in eastern Gaza City that served as the "secret headquarters" of Hamas's General Security Forces, and its General Intelligence and Military Intelligence agencies.