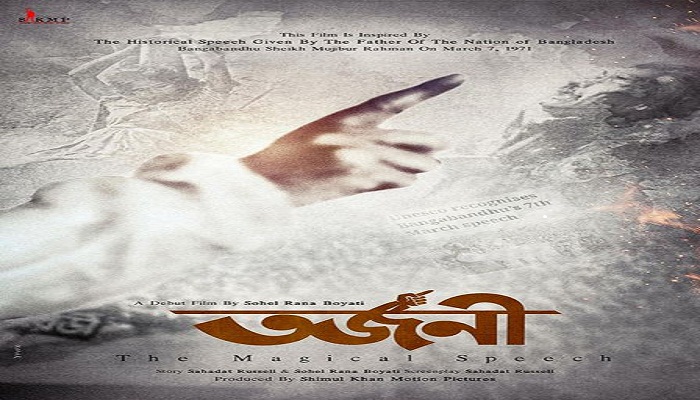 The people of Bangladesh got inspired with the Bangabandhu Sheikh Mujibur Rahman’s historic 7th March speech during the uncertainties of the days in 1971. It showed the paves to fight back the evil.

Each year the day returns to the people with endless inspiration for liberation and freedom.

The speech has been universalised for all to observe the spirit of the father of the nation. In 2017 UNESCO declared the speech as ‘World Authentic Heritage’.

Being inspired with the spirit of the speech, Director Sohel Rana Boyati decided to make a film on the speech named ‘Tarjani’. The shooting of the movie will begin in the first week of May.

The production company Shimul Khan Motion Pictures has published the first look of the Tarjani movie poster on the eve of the National Independence day.

The director will portray how the speech of Bangabandhu Sheikh Mujibur Rahman has instrumentally been influencing generation to generation.

Two years earlier they started working with the script. In this film three different periods—1971, 1975 and 2017—will be depicted.

The director told, “We, the youth want to see everything in visuals.  I thought excellent work can be done on this matter. The Speech of Bangabandhu does not belong to any group or any person, it’s for all. For our country this speech is always contemporary and relevant.”

The director Sohel Rana said that he is trying to portray how the speech has been putting deep impression on the mind of the youth of those periods.

“I myself is a young director, I will portray what changes the speech brought in me,” he added.

The main actor of 1971 and 1975 has been selected. In the context of these two historic eras Ashish Khandaker and Shimul Khan will play the role accordingly.

The shooting of the film ‘Tarjani’ will take place in Bhola, Syhlet and Dhaka.

The story of the film ‘Tarjani’ is written by Sohel Rana Boyati and Shahadat Rasel.

The production company has decided to release the movie on March 7, 2020.