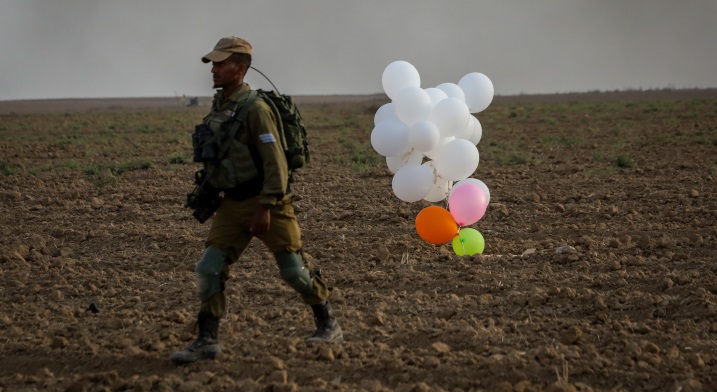 The Israeli military said Saturday it launched airstrikes against two groups of Palestinians in Gaza, after they allegedly flew balloons rigged with explosives into Israel.

"Troops identified a terrorist squad which launched explosive balloons into Israeli territory from the southern Gaza Strip," it said.

"In response, an Israel Defence Forces aircraft fired towards the terrorists."

A subsequent statement said that an aircraft fired at "an additional terrorist squad" which also launched explosive balloons from southern Gaza.

The military did not say if the targets were hit, but a Palestinian security source said that two people were wounded in the first attack. He did not know the extent of their injuries.

Israel has vowed to retaliate for every incident.

At least 257 Palestinians have been killed by Israeli fire in Gaza since weekly border protests began nearly a year ago.

Most have been killed during protests, though others have died in airstrikes and by tank fire.

Two Israeli soldiers have been killed over the same period.

On Friday the Gaza health ministry said that two Palestinians were killed by Israeli fire in two separate border clashes.

The Israeli army did not comment on the deaths but said "approximately 9,500 rioters and demonstrators" gathered in various locations, "hurling explosive devices, hard objects and rocks" at troops.

Hamas leader Ismail Haniya is calling for a mass turnout for border protests scheduled for the first anniversary of the demonstrations, on March 30.

Israel and Hamas, which has controlled the blockaded Gaza Strip for over a decade, have fought three wars since 2008.