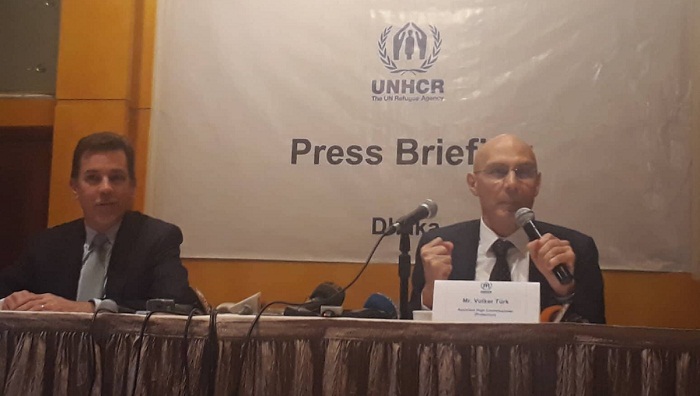 Assistant High Commissioner for Protection at UNHCR Volker Türk on Thursday laid emphasis on continuing discussion on the Rohingya relocation plan making sure that it is done on a voluntary basis.

"UN has had very constructive discussion with the government of Bangladesh on the issue of relocation and it's important for us to continue this discussion," he told reporters at a media briefing at a city hotel in the evening.

Bangladesh has planned to relocate Rohingyas to Bhasanchar Island in Noakhali from Cox's Bazar camps with required facilities for them there.

Türk laid emphasis on creating required conditions in Rakhine State of Myanmar for safe, dignified and voluntary return of Rohingyas to their place of origin.

Terming the situation in Rakhine very complex, he said they do not have access to Northern Rakhine at the moment though they were able to get access to 60 villages in 2018.

UNHCR assistant high commissioner said it is important that there is sustained attention of the international community to help Bangladesh manage the Rohingya issue here.

He concluded his visit to Bangladesh following high-level discussions with the government of Bangladesh on the pursuit of solutions to the Rohingya refugee crisis.

During his five-day visit, Türk was accompanied by the Agency’s Director of the Bureau for Asia and the Pacific, Indrika Ratwatte, and the Director of External Relations, Dominique Hyde.

Türk also met the key government officials, who have led the Rohingya response in Cox’s Bazar district, to review the challenges they are facing and the opportunities they see as the response evolves.

In Dhaka, Türk held high-level talks with the government of Bangladesh that focused on finding solutions fostering the development of conditions for the voluntary, safe and dignified return of refugees to Myanmar.

They also discussed ways to expand opportunities of the Rohingya refugees to build their skills and knowledge, particularly so they are able to contribute to society in Myanmar when they are able to return.

UNHCR assistant high commissioner said he was encouraged by and deeply appreciative of the government’s unrelenting commitment to finding solutions and improving the situation for the Rohingya.

"UNHCR and the government have agreed to focus and strengthen collective efforts that can lead to tangible improvements in their lives, in particular women and girls at risk,” he added.

UNHCR’s discussions with the government also focused on the importance of supporting Bangladeshi host communities.

Türk said the people of Bangladesh and, especially those living in Ukhiya and Teknaf in Cox’s Bazar district were the first responders in 2017, and they have continued to show a tremendous humanitarian spirit and generosity.

"The impacts of the Rohingya refugee presence on their lives must be recognised and addressed,” he said.

While in Cox’s Bazar, Türk visited one of five centers in the Kutupalong settlements where a joint government-UNHCR registration exercise is being scaled up to provide biometric ID cards for all Rohingyas.

The cards provide enhanced protection and make the delivery of humanitarian assistance and services more effective and efficient.

Registration and documentation will also play a key role in confirming that individuals who have been displaced from Myanmar have the right to return to their country when it is safe for them to do so.

So far, over 125,000 refugees have been registered and issued with ID cards.

“The Rohingya are a stateless people as well as refugees,” said Türk.

“These cards are important means to protect their identity and their right to return to Myanmar. The Rohingya represent the largest group of stateless refugees in the world. Many have never had proper identity documents. This is a big milestone in protecting their identity,” he added.

The UNHCR assistant high commissioner also saw what the government and humanitarian community, including UNHCR, have delivered on the ground, including community-based protection projects that help refugees develop skills, confidence and their ability to meet their own needs, as well as preparations ahead of the upcoming cyclone and monsoon season.

“I’m very impressed by how much we have all managed to achieve together, but also the way the refugee themselves are leading change within their community,” said Türk.

“If you look around, it is very clear that the response is much more robust than what I saw a year and a half ago. The refugees tell me that they feel more secure, which is extremely important,” he said.

UNHCR assistant high commissioner said with more than half a million young girls and boys in the camps, they now need to give more refugees more opportunities to channel their energy into meaningful and productive activities and secure the future of the Rohingya population once they are back home.

He last visited Myanmar and Bangladesh in October and November of 2017.