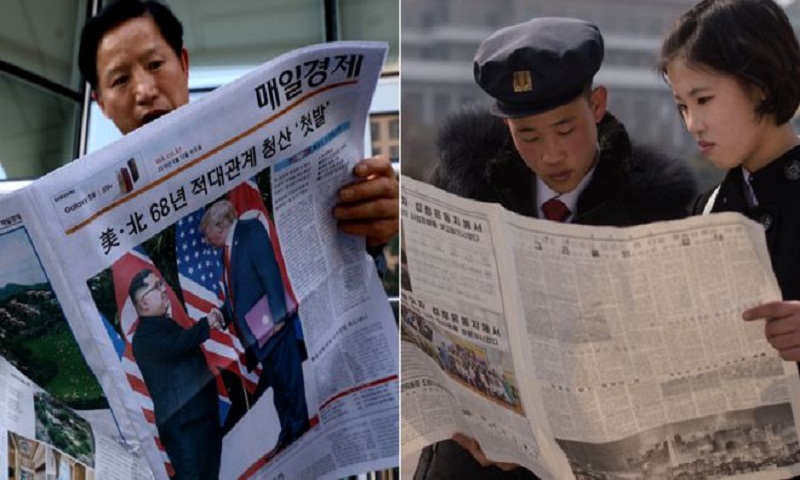 North Korean defectors who risk their lives escaping to the South face a language barrier in their new home because of the way vocabulary has evolved either side of the border.

Having risked death by escaping through China - which hands back refugees it captures - defectors often find themselves at a loss to understand words for tax, homelessness and rent.

All are alien concepts to northerners used to state ownership of everything.

North Korea's closed society means its language has changed little since the post-WW2 division of the peninsula. Meanwhile, the southern version has developed rapidly due to exposure to outside culture and technology.

Facing discrimination and difficulties due to the language barrier, defectors are turning to new options. Translation apps aim to bridge the gap, while a vast unified dictionary of the Korean language is under development.

So how did the problem arise?

Defectors already feeling like outsiders because of their northern accents must get to grips with unfamiliar terms.

The South acquired a hybrid "Konglish" US-inspired vocabulary, adopting many English words, such as "juseu" (juice) and "two-piece" (two-piece outfit).

The North also picked up loanwords from its Russian ally, such as "Tteuraktoreu" (tractor).

One word for "friend" (dongmu) in Korean became a Soviet-inspired "comrade", and was subsequently purged from the South Korean vocabulary.

Their different sense of identity also led to differences in political terms. South Korea refers to itself as Hanguk, whereas North Korea calls itself Choson in reference to the former Joseon empire.

The language barrier even made its way into sport when the unified Korean women's ice hockey team played at last year's Winter Olympics.

While southern-based players would refer to a goalkeeper as a "gol-kipeo", North Koreans would consider them a "mun-jigi" (door keeper). To get around this, the team created their own dictionary which translated hockey terms to a version of Korean everybody could understand.

How does the communication gap impact defectors?

Defectors face a vastly different social system in the South.

Beforehand they would have received scant information about their southern neighbour from tightly controlled state media, aside from insults aimed at Seoul's leaders.

Some North Koreans do learn about the South from black market media smuggled across the border, but communication remains one of the biggest barriers to assimilation.

Efforts to address the problem begin at the very outset of a defector's new life at Hanawon, South Korea's mandatory training centre for new defectors.

Hanawon's three-month training focuses on giving them the knowledge and tools to build a new life in the South.

Some non-governmental groups, such as Teach North Korean Refugees (TNKR), school new arrivals in English, which has filtered into South Korean life.

Apps and educational material are also appearing. One such service is Univoca, an app that translates everyday South Korean terms into those more familiar to North Koreans.

It allows users to build a vocabulary list, looking up words and even translating them by scanning with a camera.

A vast undertaking to codify a unified vocabulary is the Gyeoremal Keunsajeon (grand dictionary of the national language), an inter-Korean project that began in 2005.

According to South Korean lexicographer Han Yong-woon, who is part of the Gyeoremal team, the dictionary will compile words from existing dictionaries across the two Koreas and add newer words and expressions.

"We plan to collect about 210,000 words. And then we will collect new words and expressions that are being used but not in dictionaries. That would be about 100,000," Han told the BBC.

Despite obstacles, such as the initiative being put on hold during periods of political tension, Han said that the work is "about 80%" complete from the South's side and should take another five years. The North would need to confirm its own progress, he added.

Korean is one of the world's oldest languages, but its current form was introduced in the 15th Century when King Sejong the Great introduced Hunminjeongeum (Proper Sounds for the Instruction of the People) as a simplified phonetic system to replace the Chinese-based Hanja.

The script, now called Hangul in South Korea and Chosongul in North Korea, emerged as the standard for modern Korean.

The resulting cross-border differences must be addressed if aspirations for a united Korea are to be realised.