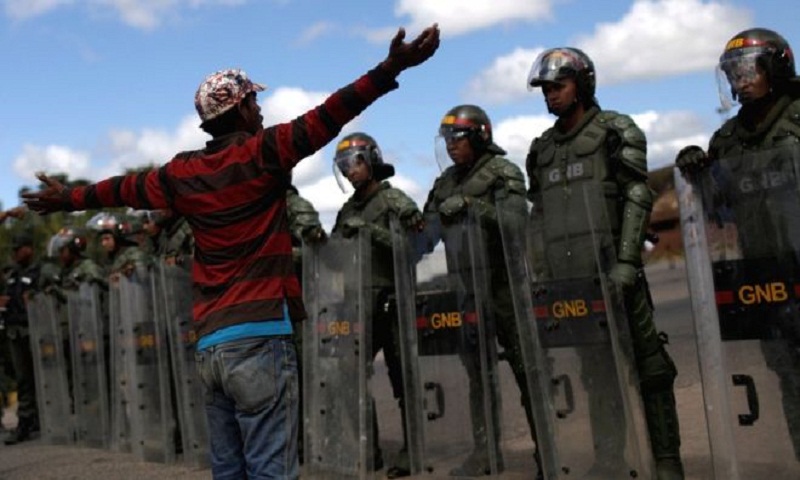 At least two people have been killed and several others injured in clashes near Venezuela's border with Brazil, local media report.

Venezuelan security forces opened fire on a group of civilians who tried to prevent them from blocking the border.

President Nicolás Maduro has closed the country's border with Brazil amid a row over the delivery of humanitarian aid.

The incident came as thousands attended two rival concerts on either side of a bridge linking Venezuela and Colombia.

The clashes occurred when members of the community confronted Venezuelan troops on Friday morning in the southern Venezuelan town of Kumarakapay, AFP news agency reports.

Troops then opened fire on individuals who tried to block a road with the aim of preventing military vehicles from passing, witnesses said.

A local woman and her husband were killed (in Spanish), according to the human rights group Kapé Kapé.

Why are there clashes at the border?

Venezuela is in the grip of a political and economic crisis. The country's inflation rate has seen prices soar, leaving many Venezuelans struggling to afford basic items such as food, toiletries and medicine.

Around 2.7 million people have fled the country since 2015.

Mr Guaidó says a lack of basic items has left thousands of others at risk of dying.

Humanitarian aid for Venezuela has been arriving at the borders of neighbouring Colombia and Brazil.

Mr Guaidó and his allies hope to collect the relief gathered there on Saturday, in defiance of President Maduro, who denies any crisis and calls the aid plans a US-orchestrated show.

President Maduro has said he could also shut the border with Colombia to stop the opposition bringing in aid.