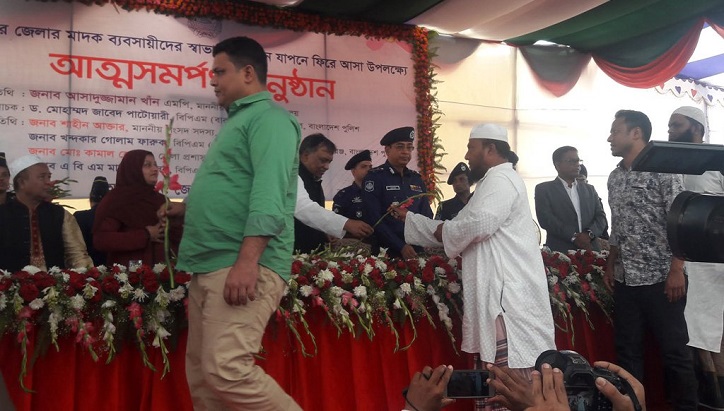 COX'S BAZAR: Wiping out the widespread speculation, some 102 yaba traders including the listed ones and their godfathers, surrendered to police with 3.50 lakh pieces of the deadly drug and 30 local firearms on Saturday.

The traders handed over the yaba pills and firearms to the home boss.

The peddlers including their 29 godfathers were greeted with flowers during the surrender and later taken to police custody.

Of them, two top-notch yaba peddlers identified as Teknaf Sadar UP members Anamul Hoque and Md Siraj also gave in on Saturday.

In his reaction, Anamul admitted the bad impacts of the drug and said people used to undermine them for the yaba trade.

“People hate us, and even they don’t rent hotel or residence. The matter is very shameful and we are surrendering to get rid of the curse.”

Siraj called upon all yaba peddlers to yield and urged the administration to pave the way for them so they can return to normal life.

He also claimed that the influx of yaba will be stopped if BGB, Police, Rab and Coast Guard work together.

Sources said the yaba peddlers will be sent to jail through the court verdict in separate drug and arms cases to be filed by the Officer-in-Charge of concerned Teknaf police station.

The accused will get support from the government in this case while the rest of the other cases against them will continue.

Addressing the ceremony as the chief guest, Home Minister Asaduzzaman Khan Kamal welcomed the yaba traders to normal life. He said those who are yet to surrender will be traced out.

The government has declared ‘zero tolerance’ against drug to accelerate the country's development, he said, adding that no criminal will be spared.

The minister said the government will extend its support if they want to develop alternative employment.

The home boss said the deadly drug is entering Bangladesh through 193 border points including Ukhia and Teknaf.

“Myanmar was requested many times to stop yaba smuggling. Although they talk about taking effective steps in this regard, actually they do nothing. So, we decided that we would strictly protect our border.”

Kamal added that there are allegations against some members of the law enforcement agencies and stern action will be taken if anyone is found involved with the crime.

Conveying strong message to those who are yet to surrender, IGP Javed Patwari said the chance may not come in future when the law enforcers will start massive crackdown against the drug peddlers.

Calling upon the yaba traders to surrender, the police chief also urged their near and dear ones to convince them to surrender.

IGP observed that Police, BGB and Coast Guard will not be able to stop the drug abuse without cooperation from the people's representatives, young generation, family and society.

Cox's Bazar Superintendent of Police (SP) ABM Masud Hossain said there are at least 30 top yaba godfathers in the new list of 450 such traders.

Following the surrender, the drive against the drug will be intensified to free the country from the clutch of drug.

The general people who came to the surrender programme observed that many top-notch yaba traders skipped the surrender process and the initiative might fail if they cannot be brought to book.

Source said police gave several conditions to the yaba traders for surrender. The conditions include handing over all yaba and illegal weapons to police and legal measures regarding the properties they earned through the illegal trade.

After the drug traders agreed to surrender, they were kept at ‘safe home’ for the last two months, and they surrendered formally on Saturday.