Raise awareness about tobacco use: Hasan 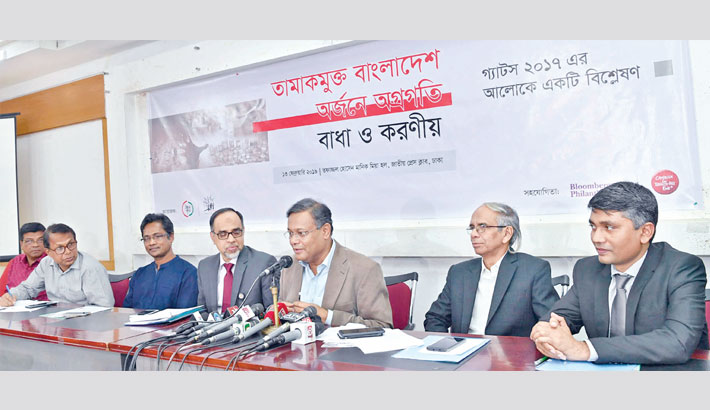 Information Minister Hasan Mahmud called upon all to quit smoking and raise awareness about the adverse impact of smoking among all, especially children.

“To build a country in line with our dream, all has to quit smoking and raise awareness about the dire consequences of tobacco use among children,” he said.

Hasan, also the publicity and publication affairs secretary, said this while addressing a discussion titled ‘Obstacles in achieving tobacco-free Bangladesh’ at Tofazzal Hossain Manik Mia lounge at the National Press Club in the capital on Wednesday.

“We hope Bangladesh will be a tobacco-free country by 2040,” Hasan said, adding that all have to work in a united way to achieve the goal.

He urged different anti-tobacco organisations to give awards to those who never smoke in their life.

“My father smoked a lot. Once, a doctor told him not to smoke cigarettes as it causes cancer. Then my father called me and asked me to make promise for not consuming any tobacco in the future. I also fulfilled the promise.”

Hasan Mahmud also called upon all to run a campaign against excessive use of social networking websites.

“We will definitely enjoy the benefits of social networking sites, but we will also reject its bad side,” he said.

Health secretary M Asadul Islam and senior fellow of Bangladesh Institute of Development Studies Naznin Ahmed, among others, spoke at the discussion with journalist Mojammel Hossain in the chair.

Speakers said that reducing rate of tobacco users is not satisfactory due to fragile work plan and flaws of law.

They urged the authority concerned to take strong measures so that none can promote use of tobacco through films, dramas and other digital media.