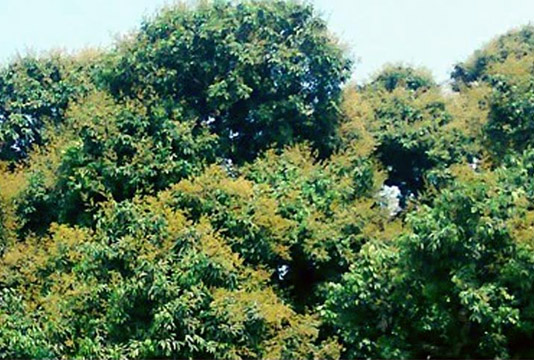 The farmers are happy witnessing excellent blooming in their litchi trees amid favorable climatic condition with advent of the spring on the eve of departure of the winter in Rangpur agriculture region.

Officials of the Department of Agriculture Extension (DAE) said excellent flowering in litchi trees has created expectation among farmers of getting plentiful production of the juiciest, fleshy and tasty seasonal fruit this season.

“About 85 percent of litchi trees in the orchards and homestead areas on 1,600 hectares of land in all five districts of the region have already bloomed,” said Agriculturist Khondker Md Mesbahul Islam, Horticulture Specialist of the DAE at its regional office.

Cultivation of litchi is expanding every year bringing fortune to many farmers following repeated bumper production with excellent market price in recent times attracting them in farming litchi on commercial basis.

Deputy Director of the DAE at its regional office Agriculturist Md Moniruzzaman said litchi flowering will continue till middle of March next when farmers will become busy with agronomical managements in their litchi orchards for better production.

He suggested farmers to spray ‘Mentozeb’ or ‘Propikonazole’ as per recommended dose to prevent powdery nose mildew or anthrax those might attack young leaves or blooming flower twigs or buds following rise in temperature amid cloudy sky.

Talking to BSS on their orchards, farmers Mokbul Hossain, Hassan Ahmed, Solaiman Ali and Masudur Rahman of Rangpur Sadar and Badarganj upazilas expressed their happiness over superb flowering in their litchi trees this season.

“The farmers are expanding commercial basis litchi cultivation after getting repeated bumper production with lucrative price in the region in recent years,” he said.

Deputy Director of the DAE for Rangpur Agriculturist Dr Md Sarwarul Alam suggested farmers to take extensive care of their orchards from March next so that the tender litchi could grow excellent to get bumper production this season.

Regional Additional Director of the DAE Agriculturist Md Shah Alam expressed satisfaction over excellent blossoming in litchi trees and predicted bumper production of the seasonal fruit this year if the climatic situation remains favourable till June next.