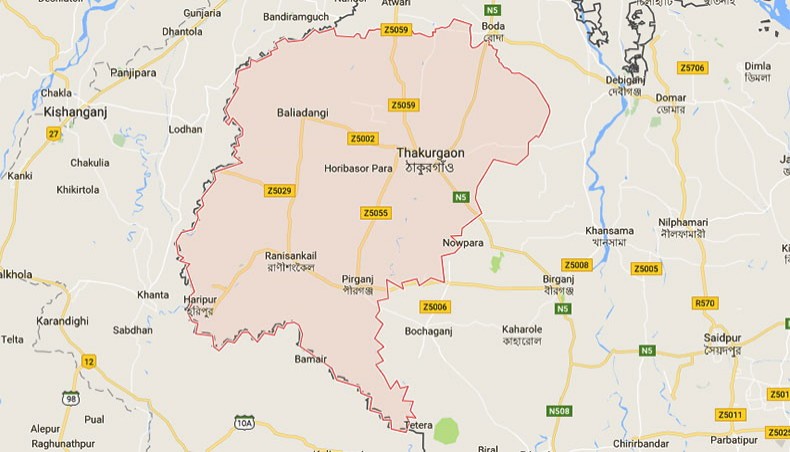 Four people, including a Secondary School Certificate (SSC) examinee, were killed and at least 16 others injured after members of Border Guard Bangladesh (BGB) opened fire during, what the paramilitary force claimed, a clash with cattle smugglers on Tuesday, UNB reports.

The incident took place at Bahrampur village in Haripur upazila in the morning.

Of them, Joynul was appearing at the ongoing SSC examination from a local school.

Locals said BGB men used to check whether cattle smuggled from India are being taken to Jaduranihaat in adjoining Ranishankail upazila which sits once a week on Tuesday.

As part of their regular practice, a team of BGB members from Betna border outpost stopped some cattle traders at Bahrampur around 11:30am while they were going to Jaduranirhaat and claimed that some of the cattle were Indian ones.

Witnesses said there had been an altercation between the two parties that ultimately turned into a full-scale clash. The BGB members then opened fire on the feuding people.

The paramilitary force members fired around 100 shots in a span of half an hour, killing Nawab and Sadeque on the spot, according to villagers.

The SP said many people were injured in the BGB firing. “They’re being treated at different hospitals,” he said adding, “Two of them --Mithun and Babu-- are in critical condition.”

Commanding officer of BGB Thakurgaon 50 Battalion Lt Col Tuhin Mohammad Masud said two people were killed in the BGB firing. “The BGB men were forced to open fire in self-defence,” he said, adding that he heard two more people died on the way to hospital.

He also claimed that cattle smugglers, armed with sharp weapons, attacked the BGB troopers at Bahrampur while they were returning after seizing several smuggled cows, forcing them to open fire in self-defence.

Resident medical officer at Haripur Upazila Health Complex Dr Abdus Samad said they removed bullets from the bodies of 14 people and provided them with first aid at their hospital.

Later, they were referred to Abdur Rahim Medical College Hospital in Dinajpur, he said.