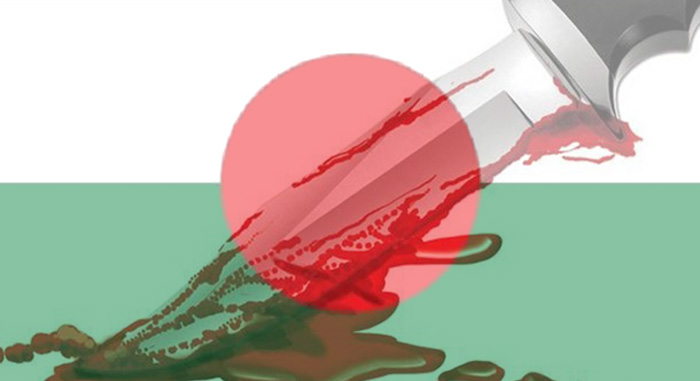 A Jubo League leader was stabbed to death allegedly by a puffed rice vendor at a trawler ghat in Noapara municipality on Thursday noon.

The deceased was identified as Jahidul Khan, 35, a member of the convening committee of ward-2 Jubo League of Noapara municipality and son of Ibrahim Khan of Mashorhati village in Abhaynagar upazila.

Imran Sheikh, a spicy puffed rice seller, at the ghat-3 of the trawler terminal, stabbed Jahidul Khan with a knife at Thursday noon during an altercation, reports UNB.

Witness Munna Mollah said an altercation ensued between them when Jahidul asked Imran Sheikh, 32, son of Salam Sheikh of Bahirgram in Narail district, to go away from the ghat but Imran refused to go away.

At one stage, the vendor Imran stabbed Jahidul in the chest with a knife, leaving him critically injured.

Later, the Jubo League leader was taken to the Abhaynagar upazila health complex where doctors declared him dead.

Alamgir Hossain, officer-in-charge of Abhaynagar Police Station, said the ghat labourers caught Imran and handed him over to police after a good thrashing.

Meanwhile, police recovered the body and sent it to Jashore General Hospital for autopsy, he said.