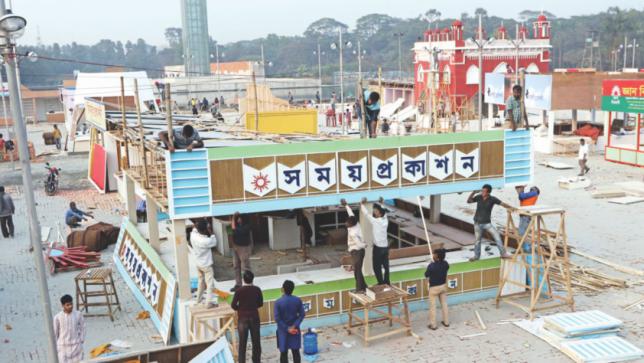 Preparations are going on in full swing for Bangladesh's biggest literary festival, the month-long 'Amar Ekushey Boimela', scheduled to begin on February 1 at the historic Suhrawardy Udyan and Bangla Academy premises.

"This year's fair will be bigger than ever before and have a more reader-friendly atmosphere," said poet Habibullah Siraji, the director general of Bangla Academy.

The theme for this year is 'Bijoy: 1952 to 1971 Ebong Naboporjay', said Dr Jalal Ahmed, member secretary of the fair's organising committee.

Works on the stalls and the main stage are almost finished.

Siraji said the area of last year's fair was extended with the increase in number of stalls. In 2018, the land earmarked for the fair was expanded to 5,50,000 square feet - 37,000 sq feet more than the year before.

This year, architect Enamul Karim Nirjhor is focusing on the glass tower of Suhrawardy Udyan so that light from it showers the whole area. Nirapad Media and Communication, run by actor Ilias Kanchan, will oversee the total management of the fair.

Seminars will be held at the main stage of the fair throughout the month wherein freedom fighters, researchers and organisers of Liberation War will participate.

Publishing houses, including 19 new ones, have been allotted over 600 stalls and around 42 pavilions. More than 100 stalls have been earmarked for government and non-government organisations on the academy premises, Bangla Academy sources said.

Publishers are working round the clock to get the books ready. The academy said 4,591 new titles will hit the fair. Writers and publishers are busy promoting their books on the social media.

Publishers said they were hoping for a buoyant sale this time, too.

Bangla Academy has launched an online application system for publications for the first time while GPS has been added to assist visitors locate their desired stalls.