Boat with migrants rescued off Libya looks for port to dock 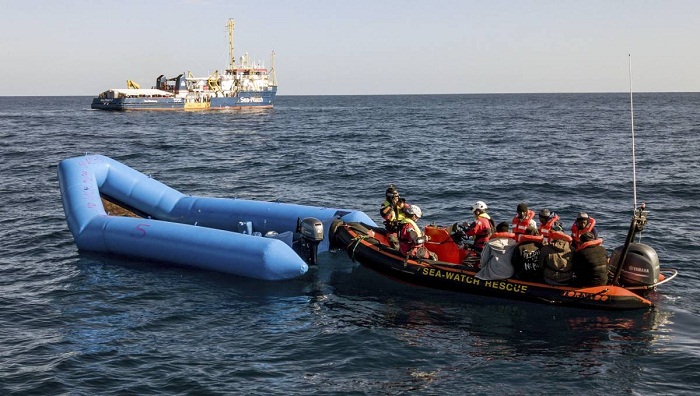 A private rescue boat carrying dozens of migrants said Sunday that for a second day several nations had not given permission for it to enter a safe port, while another vessel filled with panicky migrants and described as taking on water in the southern Mediterranean was helped by a cargo ship.

The Dutch-flagged boat Sea-Watch 3, run by a German non-governmental group, said it had contacted Italy, Malta, Libya and the Netherlands asking where it could land the 47 migrants it had taken aboard. Sea-Watch tweeted that Libyan officials hung up when it asked for a port assignment.

Separately, the Sea-Watch group tweeted Sunday afternoon that because it appeared no country's coast guard had initiated a rescue mission, Sea-Watch 3 was heading toward a vessel with 100 migrants aboard that said it was taking on water.

"We can't cover by ourselves the Mediterranean, where persons are left to die," Sea-Watch lamented, estimating that it would take it would take 15 hours for its boat to reach the stricken vessel in waters north of Misrata, Libya.

Sea-Watch said news of the migrants' plight was relayed by another aid group, Alarmphone, which promotes and operates a telephone hotline for use by people in distress at sea.

Late Sunday night, the Italian coast guard said a cargo ship, flying a Sierra Leone flag and asked by Libyan authorities to aid the stricken vessel, had rescued all aboard.  The condition and numbers of survivors weren't immediately known.

Quoting Alarmphone, Sea-Watch had said earlier that the migrant vessel reported navigational problems and that a child among them was "unconscious or deceased." Subsequent communication said the boat was "taking in water" and seeking assistance, "regardless of what this would mean concerning a possible return to Libya," Sea-Watch said.

Italy's interior minister, Matteo Salvini, who leads an anti-migrant party, told reporters Sunday that Libya had completed the rescue of at least one of those boats, and reiterated opposition to any role by private rescue groups.

Migrants dread the prospect of being returned to Libya, where they have reported torture, including beatings and rapes, in overcrowded detention centers.

The governments of Malta and Italy have been refusing to allow private boats rescuing migrants to dock. Both contend that in recent years they have taken in many migrants rescued at sea and that fellow European Union nations must agree to take their share of these asylum-seekers.

Earlier this month, Malta transferred to land 49 migrants who had been aboard Sea-Watch 3 as long as 19 days but it refused the boat port entry. The migrants were allowed to set foot on the southern Mediterranean island only after an EU-brokered deal found several countries willing to take them as well as other migrants who had been rescued at sea earlier in separate operations by Malta.