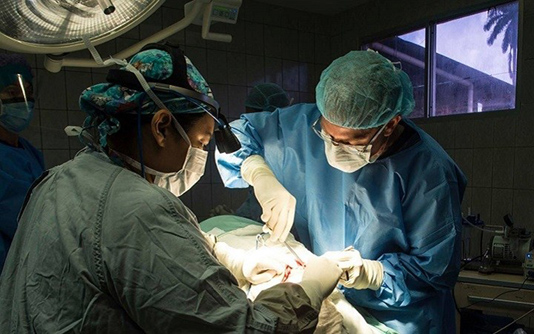 Artificial intelligence may be ready to wipe out cervical cancer, after a study has shown Thursday that computer algorithms can detect cancerous lesions much better than trained experts or conventional screening tests.

According to the World Health Organization, cervical cancer is the fourth most common cancer in women with about 570,000 new cases globally in 2018.

Despite significant advances in screening and vaccination, which may prevent spread of the human papillomavirus that causes most cases of cervical cancer, these gains have mainly benefited women in rich countries.

2, 90% of them in conditions of low – and middle-income nations, according to WHO.

"Cervical cancer is now a disease of poverty, of low resources," said senior author Mark Schiffman, a doctor at the Cancer Division of the National Cancer Institute. er Epidemiology and Genetics near Washington, which has been looking for a cure for cervical cancer for 35 years.

"We are trying to find extremely cheap, extremely easy but very accurate ways, so you can attack the cancer of the cervix with the vaccine and also a little later through a simple technique based on on the phone or something, "he told AFP.

Schiffman was part of a team that built an algorithm from an archive of over 60,000 cervical images collected from Costa Rica.

The photos were taken using only a speculum, a small light and a camera?

The AI ​​technique, called automated visual assessment, detected precancerous cells with a 91% accuracy, according to a report published in the Journal of the National Cancer Institute.

In comparison, a review of human experts detected 69 percent of pre-cancer, while conventional laboratory tests such as Pap tests found 71 percent.

Among 25-year-old women 49, who is facing the higher risk of cervical cancer, the AI ​​algorithm was even more accurate, detecting 97.7% of pre-cancerous cells.

"It worked much better than humans looking at the same images of me," said Schiffman.

The goal is to implement the technology in the next three to five years, enlisting more patients in clinical trials around the world and eventually making them easily accessible anywhere.

Schiffman said a goddess I just got hit by an important philanthropic group to help in the process.

Technology has not been patented on purpose, said Schiffman. The goal is to keep costs very low so that the neediest women can benefit from it.

"I think we now have an instrument that can go anywhere and not sacrifice the scientific quality but offer a valid medical screen," he said.

Jennifer Wu, obstetrician-gynecologist at Lenox Hill Hospital in New York who was not involved in the research, described the results as "very exciting."

"This could really reduce a lot of missed cases of cervical cancer and allow more patients access to diagnosis and treatment," he told AFP.