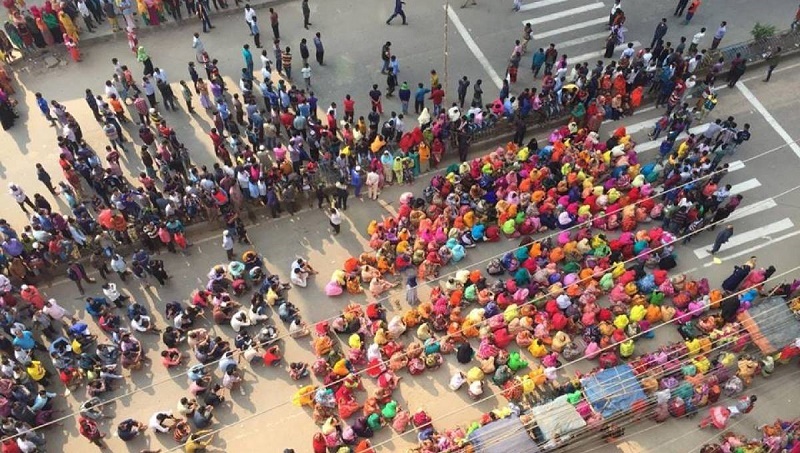 At least 35 people were injured in clashes between garment workers and police in different areas of Savar, Gazipur and the capital on Thursday, UNB reports.

The unruly workers started staging demonstrations for the fifth consecutive day on Thursday in Ashulia of Savar, Bhogra Bypass and Mogorkhal area in Gazipur and Mirpur area, demanding cancellation of the ‘discriminatory’ wage board announced by the government for them.

In Savar, at least 30 garment workers were injured in a clash with police at Jamgarah in Ashulia in the morning.

Witnesses said workers from different garment factories took to the streets in the morning at Jamgarah Choytala and have been staging demonstrations since then.

When police tried to disperse them, the workers pelted brick bats at the law enforcers. A chase and counter-chase took place between the workers and police, leaving 30 people injured.

Besides, a tense situation was prevailing in the area following the incident and a number of garment factories were declared laid off for Thursday to fend off troubles.

BGB teams were seen patrolling in the area to prevent any untoward incident.

In Gazipur, hundreds of workers of different garment factories started demonstrating in the morning.

At one stage, the workers tried to block Dhaka-Bypass road, but police dispersed them by charging baton.

A chase and counter-chase took place among the workers and police, leaving at least five people injured.

Meanwhile, the authorities of at least 30 garment factories have kept their production suspended since Wednesday following the unrest.

Severe traffic gridlocks were created from Duaripara to Mirpur-10 and also from Farmgate to Agargaon areas of the capital.