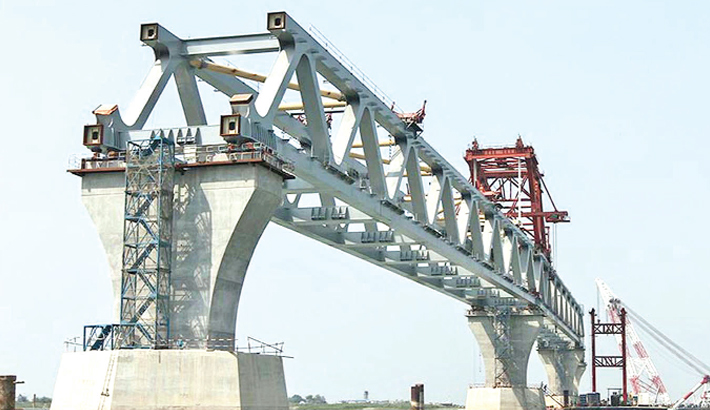 Construction work on Padma Bridge has gathered pace as  the piling-related problems have been sorted out for quick implementation of the mega project.

Officials concerned hope  that one kilometre of the 6.15km-long bridge will be visible by next month.

The seventh span of the bridge is now ready to be installed on piers no 36 and 37 by 15 January, while another 150-metre span will be installed after one and a half months, project officials informed.

“Necessary preparation for installing the 7th span on January 15 has already been taken,” commented a project engineer. He also hinted that the installation may face some delay because of some unavoidable reasons.

After installation of the 7th span, more than one kilometre of the dream bridge will be visible.

Construction work on the country’s longest bridge started in December in 2015. The 6.15km-long bridge will have 41 such spans on 42 concrete piers.

Now, project experts say that the project might be complete by next December or it might take three months’ additional time.

The construction work of the main bridge so far advanced 71 per cent while the project saw 65 per cent overall progress.

The project faced a setback after soft soil was found under a number of points where piers were supposed to be erected, delaying the project for around 15 months, project officials said.

“The Padma bridge construction work is now advancing at a greater pace. We hope that we will be able to complete the bridge within the stipulated timeframe,” Project Director Shafiqul Islam said.

Project experts said complexities with regard to the construction of the bridge have been solved as some piers have been redesigned.

In the new designs, the number of piling for 22 piers increased to seven instead of six planned earlier, while the depth of the piers has been dwarfed by 10 to 15 metres to avoid soft muddy layer.

The number of piling now increased to 262 from 240 planned earlier.

The piling work may be finished by August or September this year, according to project experts.

The project, which is expected to benefit people of 21 southwestern districts and enhance the country’s GDP by 1.2 per cent, was an electoral pledge of Awami League government in 2008.

After a long tussle with the World Bank regarding the project financing, Prime Minister Sheikh Hasina launched the project work with local money on 12 December 2015 with a target of completing it by December 2018.

After redesigning the pillars, the piling depth for the 22 problematic piers will go down to 98 to 114 metres, while most other pilings have 120 to 130 metres.

Meanwhile, work of the rail link on the bridge also started from late September last year with the installation of box slabs at the lower deck of the bridge’s piers no 41 and 42.