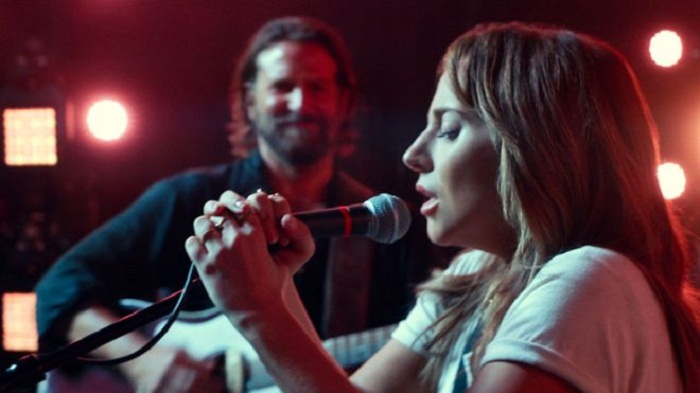 Lady Gaga's performance in A Star is Born has landed her a best actress nomination at the Golden Globes.

Bradley Cooper is also nominated for his direction of and performance in the musical remake.

Olivia Colman is also up for a best actress award for The Favourite, for which Rachel Weisz and Emma Stone are also recognised.

Rosamund Pike is nominated for best actress in a film drama, alongside Lady Gaga, for her role in A Private War.

Colman, meanwhile, will compete for the best actress in a film musical or comedy award with Emily Blunt, shortlisted for playing the title role in Mary Poppins Returns.

Blunt said she was "blown away and over the moon" to receive her sixth Golden Globe nomination, adding that she was "delighted in playing every aspect of this extraordinary and iconic character."

"The entire experience working on it was spellbinding and that's largely to do with the incomparable [director] Rob Marshall who took on this project with great love, depth and courage in his heart."

Weisz also expressed gratitude, saying she was "proud to be nominated alongside such a brilliant group of actresses, including my incredible co-star Emma".

"And all hail our nominated Queen Olivia!" she continued. "These honours are a testament to the brilliance of our director Yorgos Lanthimos."

Claire Foy is up for a supporting acting award, alongside Rachel Weisz, for the Neil Armstrong biopic First Man, as is Richard E Grant for literary comedy Can You Ever Forgive Me?.

Grant, who plays a debauched ex-pat embroiled in a forgery scandal, said he was "astonished and stunned" to receive his first Golden Globe nomination, while Foy, who plays Armstrong's wife Janet, said it was "such an honour" to be shortlisted for a third time.

"I'm so proud of First Man and share this nomination with all the cast and crew," she said. "I also share this with the entire Armstrong family who have been so generous and kind throughout the whole process of making this film."

Other British talents in the running include Hugh Grant and Ben Whishaw, nominated for their roles in BBC political drama A Very English Scandal.

There are also TV nominations for Benedict Cumberbatch (for Patrick Melrose), Westworld's Thandie Newton and Sacha Baron Cohen, in contention for his satirical series Who is America?.

It's important to note that the 95 or so journalists of the Hollywood Foreign Press Association who vote for the Golden Globes are a very different body of people to the 8,200 film professionals of the Academy who vote in the Oscars.

There's actually only one person who votes in both - actress turned journalist Lisa Lu, who plays the family matriarch in Crazy Rich Asians.

So a good showing in the Golden Globes doesn't necessarily mean that Oscar glory is sure to follow. But it's wrong to say the Globes don't exert some influence.

Right now DVDs and Blu-rays of awards contenders are piling up in the homes and offices of members of the Academy. Films that have been shut out today - like Mary, Queen of Scots and the Ruth Bader Ginsburg biopic On the Basis of Sex - may well sink down the priorities pile of some voters. The good showing of movies like Vice, meanwhile, will no doubt see it rise closer to the top.

The timing of the awards ceremony in January is crucial. The morning after the Globes are handed out, a week of Academy Awards voting begins. So a win at the Golden Globes might be the final decider for voters deciding which films to put on their Oscar nominations ballot.

His fellow nominees include Welshman Matthew Rhys, who is shortlisted for the second time for his work in spy saga The Americans.

Vice, a satirical biopic of former US vice-president Dick Cheney, has the most nominations in all, with six citations including one for lead actor Christian Bale.

A Star is Born, The Favourite and Green Book have five nominations each, while Mary Poppins Returns and Spike Lee's Black Klansman have four apiece.

Comic book blockbuster Black Panther, Queen biopic Bohemian Rhapsody and If Beale Street Could Talk, the latest film from Moonlight director Barry Jenkins, will compete with A Star is Born and Black Klansman for the best film drama prize.

Vice, The Favourite and Mary Poppins Returns are joined in the best film musical or comedy category by Green Book and Crazy Rich Asians.

Rami Malek is nominated alongside Cooper for playing Freddie Mercury in Bohemian Rhapsody.

The Assassination of Gianni Versace: American Crime Story has the most TV nominations, getting four mentions in all.

Former Glee star Darren Criss said it was "insane" and "an honour" to receive one of those nominations for playing the Italian fashion designer's killer.

Sandra Oh - nominated herself for Killing Eve - and Brooklyn Nine-Nine's Andy Samberg will co-host the 76th Golden Globe Awards, to be held in Los Angeles on 6 January.

At 84, Alan Arkin - up for best supporting actor in a series, limited series or TV movie for Netflix comedy The Kominsky Method - is the oldest nominated actor.

The youngest is 15-year-old Elsie Fisher, whose performance as an insecure teenager in Eighth Grade sees her up for best actress in a film musical or comedy.

Fisher expressed her delight at her nomination on Twitter with a single word: "WHAT".

Hamilton creator Lin-Manuel Miranda, up for best actor in a musical for the long-awaited Mary Poppins sequel, said the announcement of his nomination had caused his phone to "leap off the bedside table."

Crazy Rich Asians star Constance Wu avoided the same scenario by putting her phone on "Do Not Disturb" mode.

The Golden Globes will be the first main film and TV awards of 2019 and are considered a reliable indicator of which films and performances will go on to enjoy success at the Oscars.

"I am very grateful A Star is Born has touched so many people," said Cooper in a statement. "A huge congrats to all of this morning's nominees and especially to my dear friend, Lady Gaga."