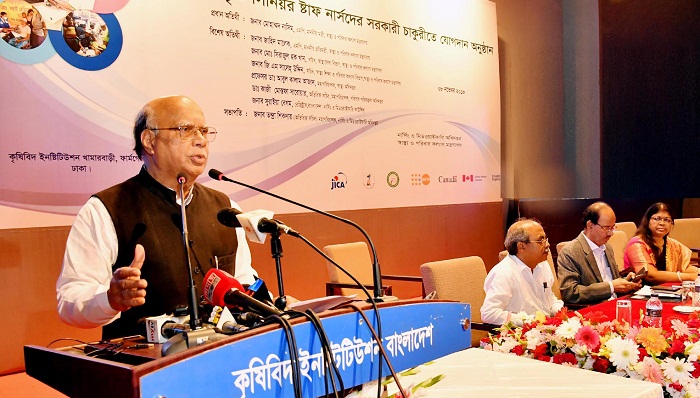 Urging the Jatiya Oikya Front and BNP to participate in the upcoming national election, Health Minister Mohammed Nasim on Thursday said those who have trust in democracy should keep faith in people, too.

“Take part in the election shunning the path of controversy to give people the chance to deliver their mandate,” he said while speaking at a programme at the Krishibid Institution Bangladesh in the capital.

Nasim also warned that the government will not tolerate any conspiracy over the election.

He said the election bell has already rung. “An election mood is prevailing in rural areas. People are taking preparations for exercising their franchise. Now, there’s no way to think alternative.”

The Awami League leader urged the Oikya Front leaders not to think any alternative but to take part in the election.

He said the election has to be arranged in the stipulated time as per the Constitution. “Those who want to deviate from the constitutional system want chaos and anarchy.”

Prime Minister Sheikh Hasina has set an example of political humanity arranging dialogue with the political parties. “The dialogue was held in a cordial atmosphere.”

Meanwhile, Chief Election Commissioner KM Nurul Huda on Thursday announced that the 11th parliamentary elections will be held on December 23 next.