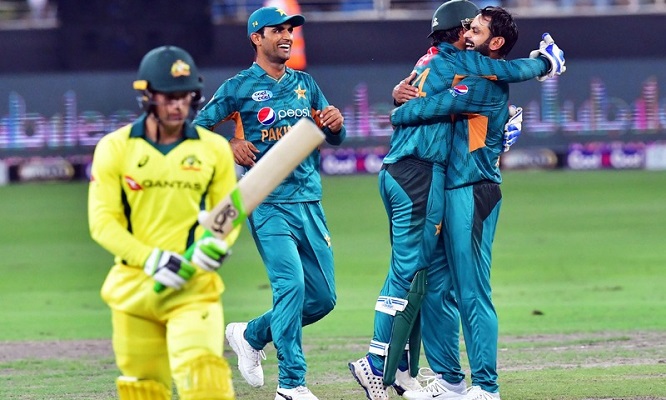 Pakistan upstaged Australia by 11 runs in the second Twenty20 international in Dubai to take an unassailable 2-0 lead in the three-match series on Friday.

Sarfaraz had opted to bat first after winning the toss. Babar Azam hit a 44-ball 45 with three boundaries while Mohammad Hafeez scored a quick 34-ball 40 with two sixes and three boundaries at Dubai stadium.

Pakistan, who won the first match by 66 runs in Abu Dhabi on Wednesday, had brought senior batsman Shoaib Malik in place of Hussain Talat.

Australia, bowled out for a paltry 89 in Abu Dhabi, replaced spinner Ashton Agar with allrounder Mitchell Marsh in the XI.

Pakistan captain, Sarfraz Ahmed says winning 10 series in a row in T20Is is not an easy thing to achieve. Reckons that they have improved in the past couple of years and it's been a combined effort between the team, management and selectors and that has helped.

On Shaheen Afridi, he says he is young but he had faith in him and the pacer repaid that showing his quality. Adds that getting Imad Wasim back in the team gives them good balance and he can even use Mohammad Hafeez too when needed.

On the batting, he feels that they played too many dot balls and if they can work on that, there are big hitters down the order who can score big when they come in.

Ends by saying that in the final game he will try out the guys who haven't got a chance to play yet.

The third match will be played in Dubai, on Sunday.