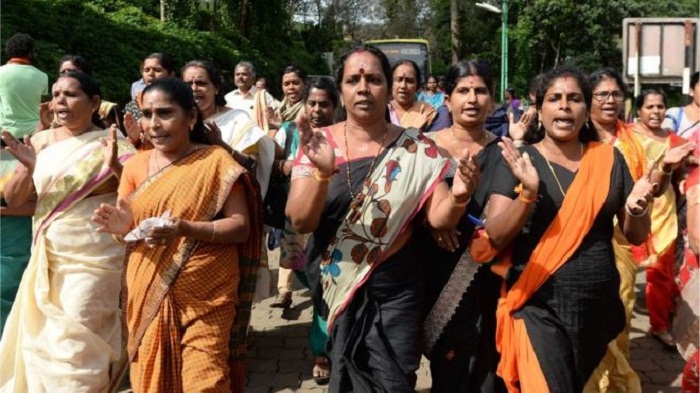 Crowds of angry Hindu devotees have prevented women from entering one of Hinduism's holiest temples despite a historic Supreme Court ruling.

Crowds of agitated protesters in Kerala attacked female devotees, many of whom turned back as a result.

Several people including an old woman were injured as crowds threw stones at vehicles and attacked police officers.

The Sabarimala temple has historically been closed to women of "menstruating age".

Hinduism regards menstruating women as unclean and bars them from participating in religious rituals.

But while most Hindu temples allow women to enter as long as they are not menstruating, the Sabarimala temple was unusual in that it was one of the few that do not allow women in a broad age group to enter at all.

This was overturned by the Supreme Court last month, with judges observing that "the right to practice religion is available to both men and women".

The temple did open its doors as directed by the court ruling. However, not a single woman was able to enter because of the protesters.

'A mob searching for women'

As the day got hotter the protestors got more agitated. They'd gathered around a fork in the road, blocking the road, looking for women of "menstruating age".

A huge roar would go up if they found someone. Some of the women we saw had to be protected by the police. Cheers would go up as buses and cars turned around.

The mob then turned on journalists - seemingly in the belief that they hadn't had a fair hearing in the national press - although the targets appeared to be women.

We'd put our cameras down as we had been told it had become dangerous. We saw one female journalist getting attacked. We saw another reporter's car had been smashed. Our car was bottled. 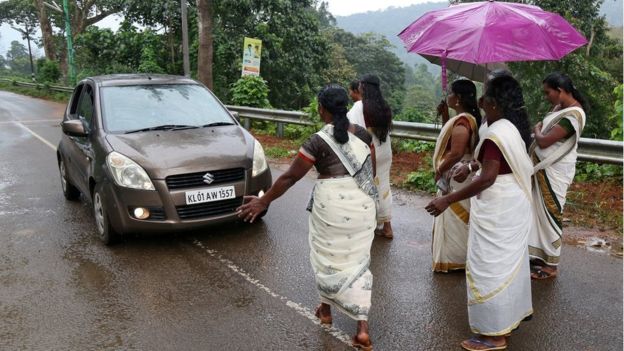 It was an intimidating atmosphere for journalists - one can only imagine what it was like for any women wanting to attend the temple.

The protesters also include many women - they have participated in rallies, blocked roads and checked vehicles heading towards the temple to see if they contain women between 10 and 50.

Every year, millions of male devotees trek up a steep hill to visit the shrine, which is believed to be about 800 years old. They undertake a rigorous 41-day fast before they begin the pilgrimage.

The campaign to allow women into the temple gathered momentum in 2016 after a protest by female students.

They were outraged by the Sabarimala temple chief's statement that he would allow women to enter only after a machine was invented to detect if they were "pure" - meaning that they weren't menstruating.

Nikita Azad, who started the campaign, told the BBC at the time that there was no "right time" to go into a temple and that women should have the right to go "wherever they want to and whenever they want to".

Petitioners who appealed to the Supreme Court to lift the ban said that this custom violated equality guaranteed under India's constitution. They added that it was prejudiced against women and their right to worship.

Supporters of the ban argued that the practice had been in effect for centuries, and there was no need to change it now.

This is the third religious site in India where women have gained the right to enter through judicial intervention.

Courts had earlier directed officials at the Hindu temple Shani Shingapur and the Muslim Haji Ali shrine, both in the western state of Maharashtra, to allow women inside.