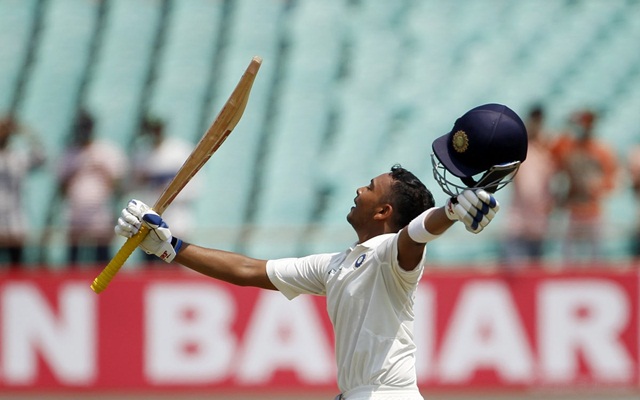 Teenager Prithvi Shaw became the youngest Indian to score a century on Test debut as the hosts reached 232-3 at tea on day one of the first match against West Indies on Thursday.

Shaw, an 18-year-old right-handed opener, reached his 100 in just 99 deliveries during a dominant 206-run second wicket stand with Cheteshwar Pujara, who made 86 in Rajkot.

He was finally caught and bowled by leg-spinner Devendra Bishoo for 134 in the last over before the break. Skipper Virat Kohli, on four, and Ajinkya Rahane were at the crease.

Shaw led India’s fightback after they lost opener Lokesh Rahul for nought in the very first over off Shannon Gabriel.

India had elected to bat in the first of the two Tests.

Tendulkar was aged 17 when he scored 119 not out against England in 1990, but that was in his ninth Test match.

Shaw reached the landmark with two runs off paceman Keemo Paul, punching his fist in the air as the home crowd gave him a standing ovation.

Shaw is the seventh-youngest international batsman to score his first Test century. He is also the third batsman after Shikhar Dhawan (85 balls) and Dwayne Smith (93) to hit his debut ton in under 100 balls.

Pujara also played an uncharacteristically quick knock as he brought up fifty off 67 deliveries, but missed out on his hundred after being caught behind off debutant paceman Sherman Lewis.

Kraigg Brathwaite, who is standing as captain after Jason Holder suffered a last-minute ankle injury, juggled his bowlers who often looked toothless.