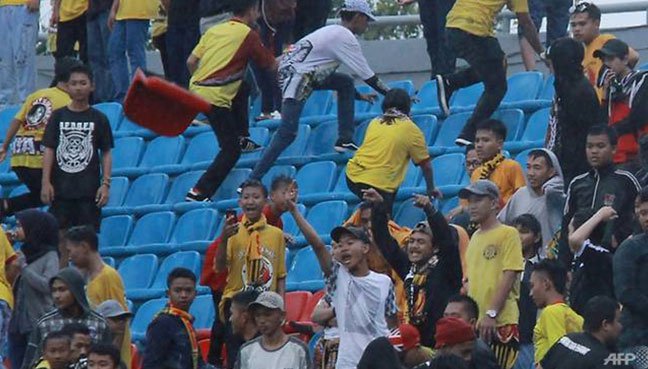 Indonesia has suspended play in its top professional football league after supporters of a rival team clubbed a fan to death with iron bars and planks, a football association spokesman said Wednesday, plunging the crisis-prone league into another scandal.

The decision follows the weekend death of Haringga Sirla, a 23-year-old Persija Jakarta fan, who was beaten by a group of Persib Bandung supporters outside a stadium in the city of Bandung, 150 kilometres (93 miles) southeast of Jakarta.

Sunday’s incident was the latest in a spate of football-related deaths in Southeast Asia’s biggest nation. The police said they have detained 16 people in connection with the killing.

“We decided that we are halting the Liga 1 competition for an indefinite period of time,” Gatot Widagdo, media director for the Football Association of Indonesia (PSSI), told AFP.

“We’re focused on solving this problem.”

Widagdo said the break in competition would allow an investigation into the fatal beating and a review of security procedures among the 18 clubs in the top flight, fans and the league operator, PT Liga Indonesia Baru.

The PSSI said it would also consult with FIFA and the Asian Football Confederation, partly as a way of avoiding sanctions, Widagdo added.

Indonesian football has been beset by problems in recent years, including poor management, corruption allegations and foreign players dying after going unpaid and being unable to afford medical care.

An explosive row between the domestic association and government prompted FIFA to ban Indonesia from international competition in 2015. The ban was lifted last year.

In July, Indonesian fans hurled stones and bottles at the visiting Malaysia team after the home side lost their semi-final match in the AFF Cup Under-19 football match.

The football tournament at last month’s Asian Games passed off without incident and Indonesia said it will bid to host the 2032 Olympic Games.

But Sirla was the 70th Indonesian football fan to die in match-related violence since 1994, including a string of deadly clashes between the Jakarta and Bandung-based clubs in recent years, according to figures supplied by local football watchdog Save Our Soccer.

“PSSI has promised it would take a firm action (in the past), but nothing happened,” Marhali said.

“This has encouraged football supporters.”

Results of the investigation would be handed to the PSSI disciplinary committee in three to five days, with sanctions possible, Widagdo said.