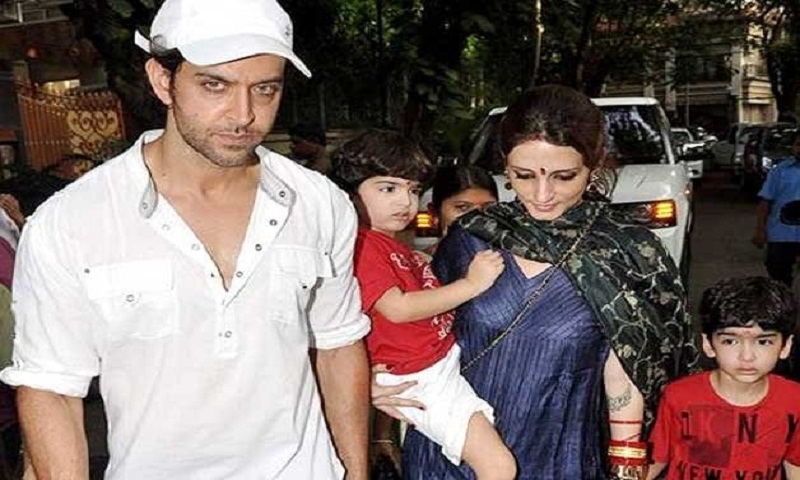 Hrithik Roshan and Sussanne Khan may have divorced but that has never stopped them from sharing time together, particularly when it comes to bringing up their sons—Hrehaan and Hridhan. They are often spotted together on movie outings with their sons or on vacations abroad.

Hence, it wasn’t surprising when Hrithik was spotted at Sussanne’s dad Sanjay Khan’s residence for Eid celebrations. In the pictures that have now appeared online, Hrithik can be seen seated in the back seat of a car. Other celebrities who attended the party included Dia Mirza (who came in with her husband Sahil Sangha), Kim Sharma, Jackky Bhagnani and Karishma Tanna. Also spotted in the crowd was Akbar Khan, Sanjay’s younger brother who is best-remembered for his song ‘Yeh Bambai Shahar Haadson Ka Shahar Hai’ from the 1984 film. Haadsaa.

Strangely in all the pictures now online, Sussanne is nowhere to be seen.

Hrithik and Sussanne, divorced in 2014, having married in 2000. However, despite their changed status, they have always been there for each other, in times of need. Hrithik has always supported Sussanne’s career choices post her divorce and has often rubbished reports like she demanding an expensive alimony as her divorce settlement. She, on her part, has stood by him when the tides turned against him as was the case when the Kangana Ranaut-Hrithik Roshan fight was at its peak, reports Hindustan Times.