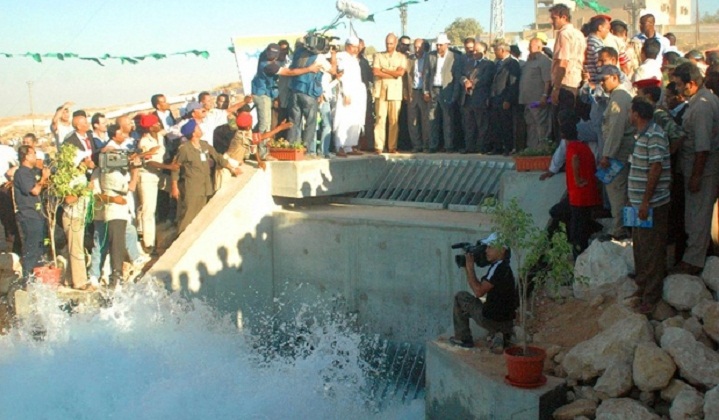 Unidentified assailants killed two Libyan workers and kidnapped two others Saturday in an attack on a water project site, the second in less than 48 hours, their employer said.

The staff had been working on a huge venture to channel water from the desert when "terrorist groups" attacked, the Libya Man-made River Project said in a statement.

Assailants were "pillaging, killing and terrorising families, children and the workers who are ensuring the supply of water" from the Tazerbo plant, around 1,500 kilometres (930 miles) south-east of the capital Tripoli, it said.

An engineer and a security guard were killed in the attack, while two other guards were abducted.

The water scheme, which was the pride of former dictator Moamer Kadhafi, channels groundwater from the desert through a vast network of pipes towards coastal towns.

Another site involved in the venture, 1,000 kilometres south of Tripoli, was attacked on Friday. Three Filipino engineers and a South Korean were kidnapped.

The two attacks have not been claimed by any group.

The violence comes less than two weeks since three Turks were released, after being kidnapped in November while working on the construction of a power plant in south-western Libya.

Since Kadhafi was ousted from power and killed in 2011, foreign workers and diplomatic missions have frequently been targeted by militias or jihadists such as the Islamic State group.