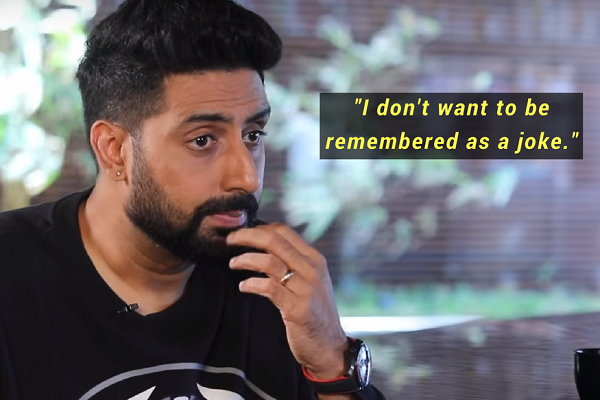 Abhishek Bachchan is no stranger to online trolling. And believe it or not, it is one of the reasons that has kept Junior Bachchan away from making movies.

Opening up in a candid interview with film critic Anupama Chopra, the 42-year-old actor admits that the brutal criticism he has received over the years on Twitter is one of the contributing forces that led him to take a 2-year-long "sabbatical" from Bollywood and work on his craft.

In the interview, Bachchan says, "I had a lot of other work simultaneously, I had ventured into sports which is another passion of mine. I had a Kabbadi team and a football team. I concentrated on that. Set up the business for that. All with the end game knowing that I needed to make it self-sufficient because I wanted to get back to acting. And in the meantime, I was looking. It wasn't that I wasn't trying to get work. I was. I just wasn't being able to put films on the floor that I wanted to make."

While the Kabaddi and football stints may have kept him away for a couple of years, Bachchan goes on to talk about the Twitter trolling he is subjected to on a daily basis that made him go-- Out of office.

"On Twitter, a lot of times, I get a lot of these guys who like to take a swing at me. And I'm fine with that. Because I'm here man. I'm a public property. Go for it. But if you're going to take a swing at me, bro, I'm going to swing back. And be prepared for that. It's just that my way of doing it is different. My sense of wit is different. I have a bit of wry and dry sense of humour. And at the end of the day also you can't take yourself seriously. You have to learn to laugh at yourself. They are either going to do it on your face or behind your back," Bachchan adds.

But no one likes getting constantly trolled on Internet, right? Bachchan admits that the mean words aimed at him on the microblogging site do bother him.

"It upsets me when somebody writes something negative about me. Be it in a joking way. Or they are trying to belittle you or whatever," he adds.

Bachchan then goes on to mention how a distasteful meme directed at his daughter Aaradhya further angered him.

The meme poked fun at how his daughter Aaradhya would not like watching Drona and Jhoom Barabar Jhoom and also wondered why Aishwarya Rai married him.

The troll immediately apologised but admitted that he wasn't a fan of Junior Bachchan's movies.

To which Bachchan responded:

But the meme had a silver lining to it. Bachchan who is making a comeback with Manmarziyan, directed by Anurag Kashyap, says that has taken the criticism to his chin and is working hard to keep everybody happy.

"I want everyone to come out of my movie and say Yes! And if there is even one person who hasn't liked something, I'm gonna take note of that. Because I want to work towards making that one person happy," the actor said.