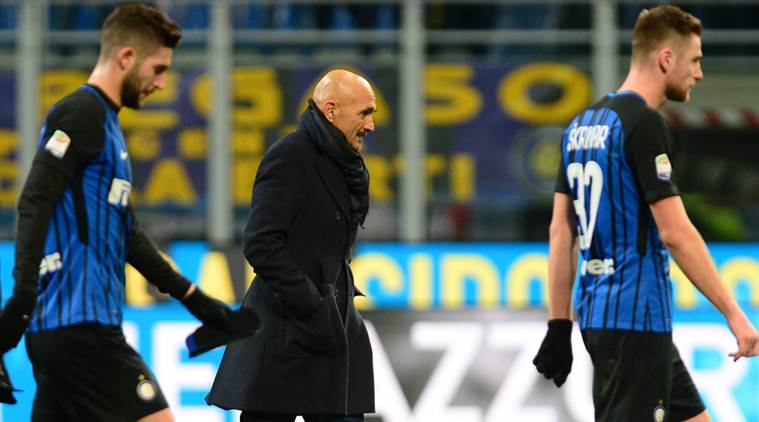 Inter Milan's crisis deepened as it was held to a 0-0 draw at home by Lazio on Saturday to leave it without a win in four league matches.

Inter was undefeated and top of Serie A only two weeks ago. But it is now seven points behind leader Napoli and six below Juventus, which won 3-1 at relegation-threatened Hellas Verona.

Roma is two points further back after a 1-1 draw with Sassuolo, while Lazio remained fifth.

The two capital sides have played a match less than the top three.

"When you're part of a team like Inter there are no alibis or excuses, we just have to get good results," Inter coach Luciano Spalletti said. "For the moment we're meeting our targets, which means that the group is working hard."

Inter moved top of Serie A with a credible 0-0 draw at Juventus on Dec. 9. However, that was mainly down to the performance of goalkeeper Samir Handanovic, and its struggles in front of goal have continued.

Three days later, Inter needed penalties to get past third-division Pordenone in the Italian Cup after a goalless draw. That was followed by league losses to Udinese (3-1) and Sassuolo (1-0) before Wednesday's surprise Cup defeat to AC Milan.

Inter has scored just one goal in its past six matches in all competitions.

It was the visitors who went closest to scoring at the end of the first half when Inter midfielder Borja Valero attempted to head clear Lazio's corner and it came off the crossbar.

Valero almost scored at the right end for Inter but Lazio goalkeeper Thomas Strakosha did well to turn his effort onto the post.

Lazio was awarded a penalty on the hour mark but, after reviewing the incident on video (VAR), the referee revoked his decision as Ciro Immobile's cross had hit Milan Skriniar's leg before bouncing up onto his arm so the handball was involuntary.

"My appraisal of VAR is completely negative because it takes emotions out of football, now you don't even celebrate after a goal," Lazio coach Simone Inzaghi said. "We would've had an extra seven points this season without VAR."

Paulo Dybala broke his goal drought by scoring two goals to help Juventus keep up the pressure on Napoli at the top of Serie A by beating Hellas Verona 3-1.

Dybala hadn't scored in the league since Nov. 19 but he restored Juve's lead in the 72nd and doubled his tally five minutes later.

Juventus bettered one of its own Serie A records, having now scored in 23 consecutive away matches.

Sassuolo was revitalized under new coach Giuseppe Iachini and had won its previous three league matches, but fell behind in the 31st minute against Roma when Edin Dzeko rolled the ball across the area for an unmarked Lorenzo Pellegrini to fire into the far bottom corner.

Simone Missiroli headed in the equalizer in the 78th

Edin Dzeko had a goal for Roma ruled out for offside as did Alessandro Florenzi, who was making his 200th appearance for the club.

Benevento recorded its first Serie A victory with a 1-0 win over Chievo Verona.

Benevento had the worst start to a season in modern history among Europe's five major leagues, losing 17 of its previous 18 matches in its debut season in Serie A.

Benevento picked up its first Serie A point at the beginning of the month when goalkeeper Alberto Brignoli's injury-time equalizer secured a 2-2 draw against Milan.

Teenage goalkeeper Gianluigi Donnarumma marked his 100th appearance for Milan by helping it rescue a 1-1 draw at Fiorentina.