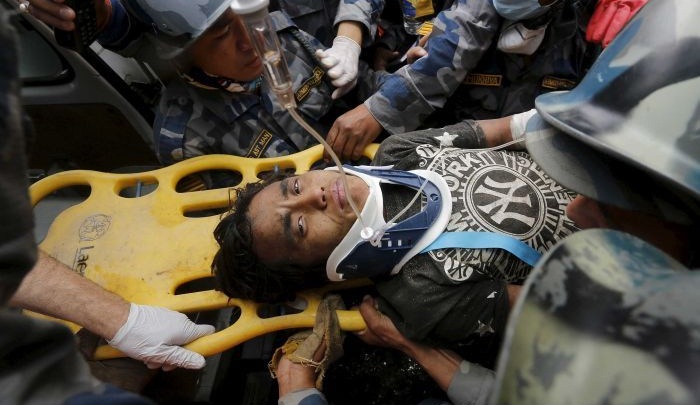 KATHMANDU: A 15-year-old boy has been rescued after spending five days in the rubble of a building, following an earthquake that killed some 5,500 people in Nepal.
A huge crowd cheered as rescuers freed the boy from the collapsed building in the capital, Kathmandu. The boy has now been taken to a field hospital.
Meanwhile, bad weather is hampering the delivery of relief to remote villages, a Nepali government spokesman said. The government has been criticised for its response to the disaster.
Outside the capital, the relief effort has relied heavily on helicopters, with mountainous roads blocked by landslides triggered by the earthquake.
Laxmi Dhakal, a spokesperson for Nepal's home ministry, told the BBC that helicopters loaded with rescue workers and relief materials were ready to fly but had been held back by "rainfall and cloudy conditions".
In Kathmandu, rescue workers from Nepal and the US worked for hours to free the boy from the rubble of the building.
The boy, identified as Pemba Lama, eventually emerged blinking into the sunlight.
He was carried away on a stretcher with a blue brace strapped around his neck, and has now been taken to an Israeli-run field hospital.
The BBC's Yogita Limaye tweets that the boy told her he survived by drinking water from wet clothes and eating from pots of clarified butter.
Andrew Olvera, an official from the US Agency for International Development, earlier told the Associated Press news agency that the boy had been trapped between the collapsed floors of the building but was not "too far down".
On Wednesday night, Nepalese soldiers in the town of Bhaktapur, on the outskirts of Kathmandu, reportedly rescued an 11-year-old girl from earthquake rubble.
The girl was freed from a damaged building in the town's Dattatreya Square, according to a tweet from Kunda Dixit, the editor of the Nepali Times newspaper.
Meanwhile, climbing is expected to resume next week on Mount Everest, where avalanches triggered by the earthquake killed 18 people.
Damaged ladders in an area of the mountain known as the Khumbu icefall would be repaired within the next few days, according to the chief of Nepal's tourism department, Tulsi Gautam.
"There is no reason for anyone to quit their expedition," he said.
(Courtesy: NBC News)
No supplies
Frustration has been growing in parts of rural Nepal over the pace of relief efforts, with some badly-affected villages yet to receive any assistance.
Survivors in some areas told the BBC that they were angry that neither food nor medicine had reached them.
The UN has appealed for $415m (£270m) to help provide emergency relief over the next three months. Officials say Saturday's quake injured at least 11,000 people.
The UN says more than eight million people have been affected by Saturday's 7.8-magnitude quake and some 70,000 houses have been destroyed.
Dozens of countries are supporting the aid operation, contributing search-and-rescue teams, aircraft, medical supplies and communications equipment.
Some helicopter crews who have managed to land in isolated communities have been faced with desperate villagers pleading to be airlifted to safety.
Despite extensive damage, experts say the number of casualties in many villages was lower than feared because people were working outdoors at the time the quake struck.
In Kathmandu, riot police clashed on Wednesday with protesters angry at a lack of transport out of the city and delays in distributing aid. Thousands were waiting for buses to take them to rural areas.
Witnesses said a truck carrying drinking water was forced off the road and protesters climbed on top of it, throwing the bottles into the crowd.
However, there have been some signs that parts of the capital are returning to normal.
Some people have decided to return to their homes, having spent several nights out in the open. Cash machines have been refilled and some shops and street vendors have once again started trading.