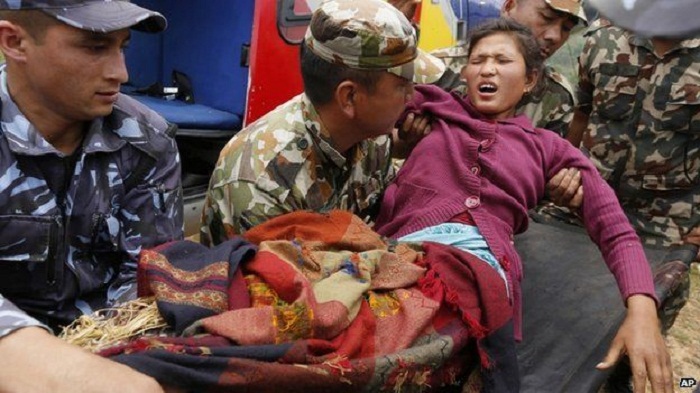 Helicopters are bringing in injured people from remote areas

Nepal has declared three days of mourning for the victims of Saturday's earthquake in which more than 5,000 people are now known to have died.
Prime Minister Sushil Koirala says the government is doing all it can but is overwhelmed by the scale of the catastrophe.
Rescuers are still struggling to bring aid to remote Himalayan areas.
Heavy rain is worsening the plight of hundreds of thousands of people camped out in the open.
The UN estimates that eight million people in 39 districts have been affected by the 7.8-magnitude quake - more than a quarter of the population.
More than 10,000 people have been injured.
Among the dead are 18 climbers who were at Mount Everest base camp when it was hit by an avalanche triggered by the quake.
In a televised address, Mr Koirala said: "In memory of the Nepali and foreign brothers and sisters and elders and children who have lost their lives in this devastating earthquake, we have decided to observe three days of national mourning from today."
Earlier, he said a lack of equipment and expert personnel meant the "appeals for rescues coming in from everywhere" in many cases could not be met.
Landslips and aftershocks in remote mountainous areas around the epicentre of the quake are hampering rescue and relief teams.
A government spokesman told the BBC that helicopters had been dropping tents, dry food and medicine to remote villages but they were yet to reach many isolated communities.
When helicopters have managed to land, they are often mobbed by villagers pleading for food and water, or to be evacuated.