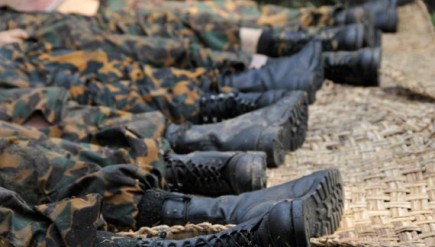 The High Court (HC) on Monday upheld the death sentence of 139 people among 152 condemned convicts in the Pilkhana BDR mutiny case.

Among the 152 condemned convicts, one died, four were acquitted and the death sentence of eight commuted to life term imprisonment.

Besides, the HC upheld the life term imprisonment of 146 convicts, among 160, acquitted 12 while two others died.

Earlier in the morning, the court concluded its observations with a seven-point recommendation in the case.

Justice Md Nazrul Islam Talukder read out the verdict in the afternoon after a three-member bench of Justice Md Shawkat Hossain, Justice Md Abu Zafor Siddique after their observations in this regard.

The HC also asked the authorities concerned to form probe committees to investigate why intelligence agency of BDR (now BGB) failed to know beforehand about such a big mutiny.

It also asked the government to pay the dues to the 'BDR' officials sacked following the carnage.

Justice Siddique observed that a vested quarter had wanted to destroy a skilled and trained force through the Pilkhana BDR mutiny to destablise the country and jeopardise its economic and social security.

He also described the BDR mutiny as an unprecedented incident in the world history. Later, the court postponed the reading out of the verdict till Monday morning.

On April 3 last, a three-member special HC bench, led by Justice Shawkat Hossain, kept the verdict pending as Curia Advisari Vult (CAV) after concluding the hearing on the appeals and the death reference.

A Dhaka court on November 5, 2013 sentenced 152 soldiers of the erstwhile Bangladesh Rifles and two civilians to death, and 161 others to life imprisonment for their involvement in the BDR mutiny.

A total of 257 appeals were filed with the High Court against the lower court verdict.

Seventy-four people, including 57 army officials, were killed in the BDR mutiny on February 25-26 in 2009 at the Pilkhana headquarters in Dhaka.