Kangana Ranaut injured on the sets of Manikarnika 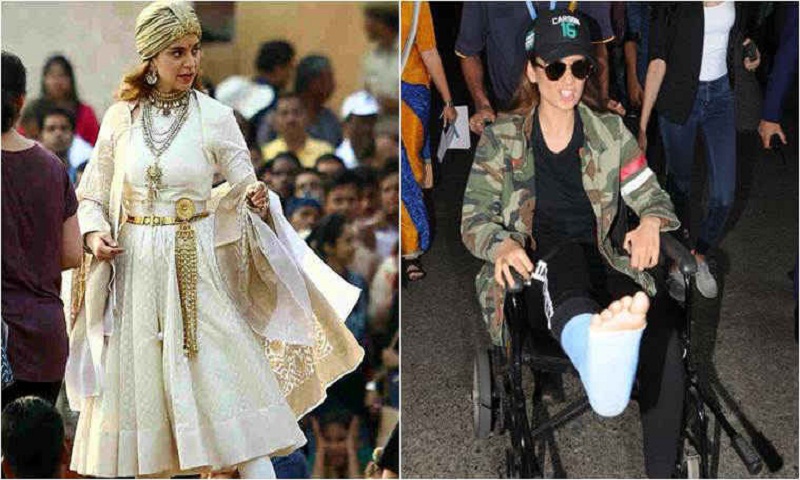 Kangana Ranaut is a fighter. Be it at her work or her life, the actor never backs down when a challenge is thrown at her. Recently, the actor met with an accident on the sets of her upcoming film, Manikarnika, while performing an action sequence but like the fighter the she is, this could not get her spirits down.

Kangana plays the iconic role of Rani Laxmi Bai in the film. She was shooting for the same at Jodhpur’s Marangarh fort. In the scene, Rani Laxmi Bai jumps off a 40 feet wall with Damodar, her adopted child tied to her back on to a horseback. While performing this scene, Kangana didn’t land properly and in an attempt to save the kid from any injury, she ended up hurting her ankle.

The Simran actor was taken to a hospital immediately in the early hours of Wednesday as the crew was filming a night scene. After the initial checkup and X-rays, it was discovered that Kangana had a ligament tear. She has already finished shooting for major action sequences for the film and this was the last dangerous one that was to be performed by her.

Kangana’s right leg is in a cast now and she has been advised to rest for one week. The filming of Manikarnika will resume as soon as her cast comes off, which will probably happen in another two weeks.

This is the second time when Kangana has gotten injured on the sets of Manikarnika. Earlier, while shooting for a sword fighting scene, co-actor Nihar Pandya’s sword hit her head and she was left bleeding profusely. This accident scarred her face but Kangana flaunted it proudly like a battle scar. Kangana had to get 15 stitches between her eyebrows after this accident.