16 killed in separate bombings in Afghanistan 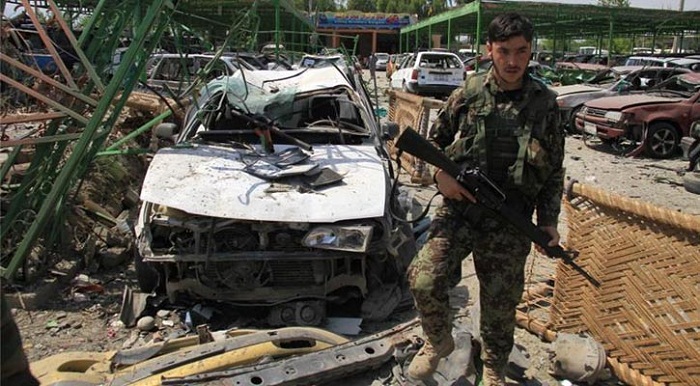 Bomb attacks in Afghanistan have killed 16 people in two separate attacks in the country's eastern provinces, officials say.
The Taliban claimed responsibility for a suicide attack on Friday on a convoy carrying US troops near a military base not far from Jalalabad airport. The explosion killed four Afghan civilians.
In a separate incident also on Friday, 12 people were killed in Ghazni province when the minivan they were travelling on was hit by a roadside bomb.
No US soldiers were hurt in the bombing near Jalalabad, security officials told the Associated Press news agency.
The attack happened outside the gates of the base, as a convoy was returning from a patrol, according to an official at the base who spoke on condition of anonymity because he was not authorised to talk to media.
The area is built up, with residential housing mixed with retail outlets, mostly selling vehicles and automobile parts. Friday is the Muslim weekend in Afghanistan and the area is typically bustling with people.
Zabihullah Mujahid, Taliban spokesperson, says the armed group was behind the attack.
The bombing came just two days after an Afghan soldier turned his weapon of American troops at the Nangarhar provincial governor's compound, about 5km from the US base.
One US soldier was killed and eight others were wounded in the attack.
No group has so far claimed responsibility for Wednesday's attack, which was the first so-called insider attack to target NATO troops since they ended their combat mission at the start of the year.
Armed groups have been fighting the Kabul government since Afghanistan's Taliban rulers were overthrown by a US-led invasion in 2001.
As the weather warms up, attacks from fighters moving into Afghanistan across the mountains that border Pakistan are expected to intensify.