US and Cuba hold highest-level meeting in over 50 years 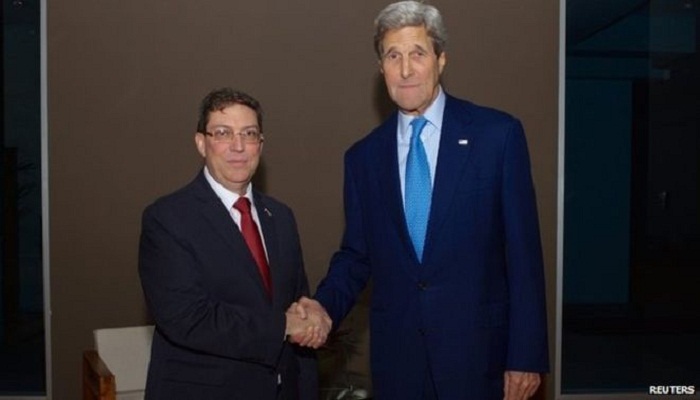 US Secretary of State John Kerry and Cuban Foreign Minister Bruno Rodriguez have held talks, in the highest level meeting between the two countries in more than half a century.
The two held closed-door discussions after arriving in Panama for a summit.
Meanwhile, the US state department has reportedly recommended that Cuba be removed from its list of states said to sponsor terrorism.
Such a move could pave the way for the two countries re-opening embassies.
US President Barack Obama and Cuban leader Raul Castro are also due to hold their first formal meeting at the Summit of the Americas in Panama over the coming days.
Few details have emerged from the meeting between Mr Kerry and Mr Rodriguez. The last comparable high-level meeting was in 1959, when Fidel Castro met then Vice-President Richard Nixon.
Diplomatic ties froze two years later, but last year Mr Obama announced that a "new chapter" in relations would commence.
Despite the huge political gulf between them, Barack Obama and Raul Castro are on the verge of making history in Panama.
Not since President Eisenhower sat down with Cuban leader Fulgencio Batista has a sitting US president met a Cuban one.
President Obama may also now come bearing gifts. It is expected that he will confirm that Cuba has been removed from the list of state sponsors of terrorism, a sticking point between the two countries which dates back to 1982.
For Mr Obama, this is an important diplomatic step which shows to the Cuban leader he is a man of his word when it comes to a willingness to normalise relations with the communist island.
From Cuba's perspective, being taken off the blacklist is a welcome move and a key priority to moving the relationship forward - though they felt their inclusion was illegitimate in the first place.
Meanwhile Senator Ben Cardin, a leading member of the Senate Foreign Affairs Committee, said the US State Department had recommended removing Cuba from the list of state sponsors of terrorism.
The move was "the result of a months-long technical review" and would be "an important step forward in our efforts to forge a more fruitful relationship with Cuba", he said.
Cuba is one of four countries still on the US list of countries accused of repeatedly supporting global terrorism; Iran, Sudan and Syria are others.
It was first put on the list in 1982 for offering sanctuary to militant ETA Basque separatists and Colombian Farc rebels.
Removing Cuba from the list could lead to the easing of financial restrictions on Cuba's access to loans and aid.
If Mr Obama opts to accept the state department's recommendations, Congress would have 45 days to decide whether to override him.
He faces fierce critics of his Cuban policy at home, such as from Cuban-American Ted Cruz, who is a Republican presidential candidate.
Correspondents say removing Cuba from the list of state sponsors of terrorism will throw a stark light on the US's relations with Venezuela.
The Venezuelan President Nicolas Maduro hopes to bring a petition signed by 10 million of his citizens urging Mr Obama to remove an order imposing sanctions against seven Venezuelan officials accused of human rights abuses in an opposition crackdown.
Oil-rich Venezuela has many friends at the summit and other Latin American nations have criticised the order, which calls Caracas a US national security threat.
President Obama has tried to reduce tensions with Venezuela ahead of the summit, saying the US did not perceive the country as a threat.
"But we do remain very troubled by the Venezuelan government's efforts to escalate intimidation of its political opponents," he told the Spanish news agency EFE.