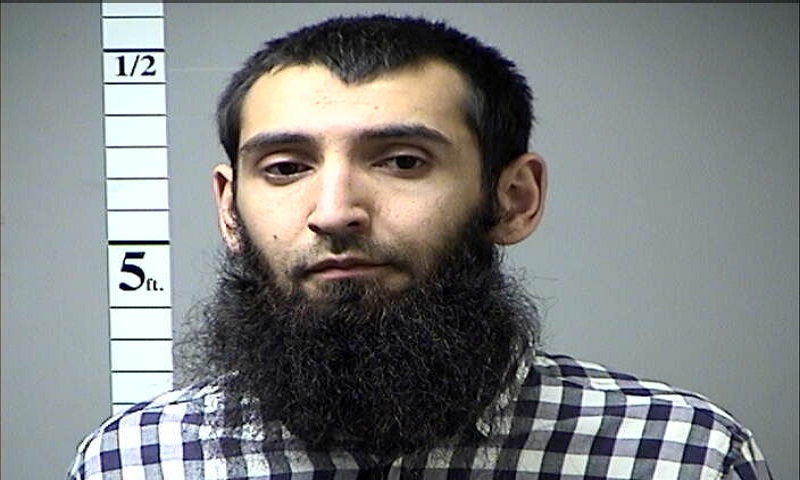 US President Donald Trump has repeated calls for the suspect in the New York truck attack to get the death penalty.

But Mr Trump backed away from his call a day earlier to send Sayfullo Saipov to Guantanamo Bay, saying "that process takes much longer".

Later, so-called Islamic State (IS) said it had carried out the attack.

The attacker was "one of the caliphate soldiers", it said in its weekly al-Naba newspaper, without providing evidence to support the claim.

The victims were five Argentines who had travelled to New York to celebrate 30 years since their high school graduation, a young mother from Belgium and two Americans.

Mr Saipov, 29, an Uzbek immigrant, was shot at the scene by police, according to officials. Investigators say he told them he was inspired by IS.

Mr Saipov, who appeared in court on Wednesday in a wheelchair, faces federal terrorism charges, which means the government could override New York state's ban on capital punishment.

"There is also something appropriate about keeping him in the home of the horrible crime he committed," tweeted the Republican president, a native New Yorker, on Thursday morning.

However, some legal commentators suggest that Mr Trump's comments could be seen as prejudicial to a trial.

Earlier this week, a military judge said he would consider a lighter sentence for Bowe Bergdahl, a US soldier who deserted his Afghan base, because of Mr Trump's previous urging for that defendant to face the death penalty.

Is there a precedent for this?

It is unusual for US presidents to hold forth on pending criminal cases, but not unheard of.

In 1970, lawyers for mass murderer Charles Manson called for a mistrial after President Richard Nixon declared the cult leader guilty - in the middle of his trial.

Nixon backtracked and the judge allowed the case to go ahead.

Mr Trump has previously called for capital punishment to be applied in high-profile cases.

In 1989, when a group of five black and Latino men were charged with a particularly brutal rape of a woman in New York City, Mr Trump paid $85,000 for an ad in city newspapers with the headline "Bring Back the Death Penalty!"

The five defendants were later cleared by DNA evidence.

What did the New York suspect say?

Prosecutors say Mr Saipov spoke freely to them, waiving his right to avoid self-incrimination while in custody.

According to federal court papers, he said:

He originally planned to target the Brooklyn Bridge as well

He wanted to display IS flags on the truck, but decided not to draw attention to himself

He was inspired by 90 graphic and violent propaganda videos found on his phone - in particular, one in which IS leader Abu Bakr al-Baghdadi asks what Muslims are doing to avenge deaths in Iraq.

Mr Saipov was charged with one count of providing material support and resources to IS and another count of violence and destruction of motor vehicles.

Was suspect on law enforcement's radar?

CBS News quotes an intelligence source as saying Mr Saipov was known to US authorities after his name was associated with the subjects of FBI counter-terrorism investigations in 2015.

The source says the suspect had some contact with individuals who were considered radicalised extremists, at least one of whom was Uzbek. It is unclear whether those being investigated were in the US or overseas.

It is not known if Mr Saipov, who was not the main focus of the investigation, was interviewed at that time by the FBI.

The FBI meanwhile says they have located a second Uzbek man, 32-year-old Mukhammadzoir Kadirov, who was wanted for questioning in connection with Tuesday's attack.

The two Americans have been identified as Darren Drake, 32, and Nicholas Cleves, 23.

Twelve others were injured, four of whom remain in critical condition.