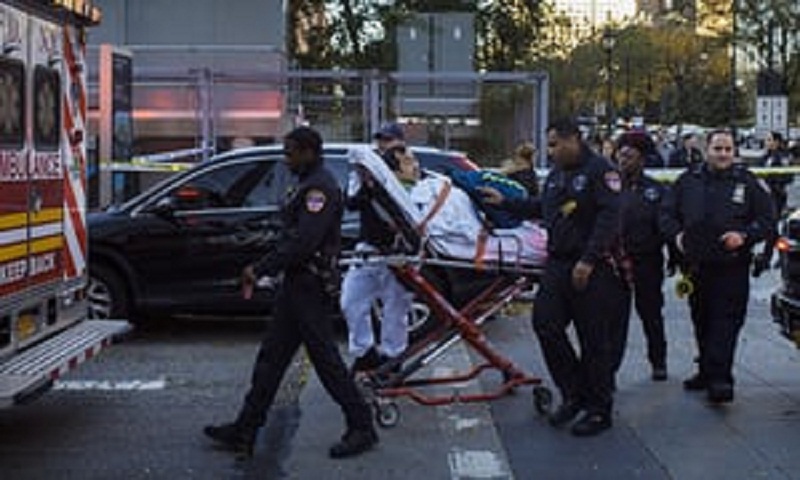 Five friends from Argentina were among those killed in a truck attack in New York on Tuesday.

Eight people were killed and 11 injured when the driver of the truck hit people on a cycle path in Lower Manhattan.

A 29-year-old man, reported to be an Uzbek immigrant, was shot and injured by police as he left the vehicle.

US President Donald Trump has ordered the Department of Homeland Security to "step up" vetting measures in the wake of the attack.

The suspect reportedly shouted "Allahu Akbar" ("God is greatest") as he left the truck. Officials said it was a terror attack.

A note was found in the truck that referred to so-called Islamic State, law enforcement sources were quoted as saying by US media.

The deaths of the five Argentines were confirmed by the country's foreign ministry. They were part of a group of 10 friends in New York to celebrate the 30th anniversary of their graduation from a polytechnic college in the central city of Rosário, Argentine media said.

One of the men who died, steel firm owner Ariel Erlij, helped pay for the friends' trip, La Nación newspaper reported (in Spanish).

Argentina's foreign ministry named the men - all reportedly aged 48 or 49 - as Diego Enrique Angelini, Alejandro Damian Pagnucco, Ariel Erlij and Hernan Ferruch. Another of the friends, Martin Ludovico Marro, is being treated in hospital.

Three days of mourning have been called in Rosário, Clarín newspaper reported.

President Mauricio Macri expressed his "deep condolences" for the victims' families on Twitter.

A Belgian national was also killed, Belgium's foreign minister said. Two other victims have not yet been identified.

Shortly after 15:00 local time (19:00 GMT), a white pick-up truck rented from retailer Home Depot struck cyclists and pedestrians while being driven along the West St-Houston St path for many blocks

The vehicle then hit a school bus, injuring two adults and two children on board, and came to a halt

Mangled bicycles littered the scene of the attack, which occurred as much of the city was celebrating Halloween.

One witness, identified as Eugene, told ABC Channel 7 that he saw the white pick-up truck driving fast down the cycle path alongside the West Side Highway, near Stuyvesant High School, at full speed and hitting a number of people.

He also reported hearing about nine or 10 shots.

Another witness, who gave his name as Frank, told local TV network NY1 that he had seen a man running around an intersection and heard five to six gunshots.

"I saw he had something in his hand, but I couldn't tell what it was. But they said that it was a gun...

"When the cops shot him, everybody started running away and it got a little bit crazy right there. So when I tried to look again, the guy was already down."

What has been the reaction?

President Trump had been briefed about what happened in New York on Tuesday afternoon, the White House said.

"In NYC, looks like another attack by a very sick and deranged person. Law enforcement is following this closely. NOT IN THE U.S.A.!"

"We must not allow ISIS [Islamic State] to return, or enter, our country after defeating them in the Middle East and elsewhere. Enough!"

"My thoughts, condolences and prayers to the victims and families of the New York City terrorist attack. God and your country are with you!"

He also announced that he had ordered the Extreme Vetting Program to be stepped up. He did not elaborate further.

What is known about the suspect?

The NYPD said only that the attacker was a 29-year-old man.

However, US media named him as Sayfullo Saipov, who had reportedly lived in Tampa, Florida, and Paterson, New Jersey.

He arrived to America from Uzbekistan in 2010 and is believed to be a legal resident in the country. Car-share service Uber confirmed he had been working for them.

Three officials said Mr Saipov had previously come to the federal authorities' attention as a result of an unrelated investigation, the New York Times reported.

Police records show he was arrested in Missouri last year over a traffic fine.