When ‘Simpsons’ Co-Creator Sam Simon Pulled Out of a Portrait Commission, Simon Dinnerstein Made a Few Changes 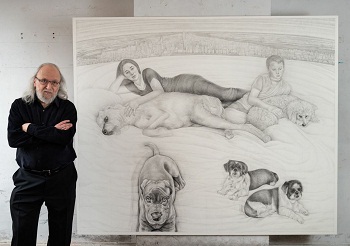 This is exactly what happened after Dinnerstein, the 72-year-old artist best known for his monumental Fulbright Triptych (1971–74), was commissioned to draw a 6-foot-by-7-foot portrait of Sam Simon, who was a co-creator of The Simpsons, his fiancée Jenna Stewart, her daughter, and their five canines. After Simon split with Stewart, he refused to pay for the completion of the drawing, so, after a bit of soul searching, Dinnerstein got out his eraser and removed the couple, then drew in his daughter Simone and his grandson Adrian. A Manhattan skyline replaced Simon, who originally appeared at the top of the frame. The decision to insert his family into the drawing came after a frustrating period in which the Brooklyn artist was unable to reach his patron in Los Angeles. Eventually, Simon agreed to send Dinnerstein the second of three promised payments but only if the artist agreed to scrap the original project.
“I wouldn’t say I was crestfallen but I was very disappointed,” Dinnerstein told ARTnews. “I couldn’t figure out how to keep going on it or whether I should keep going.
“I think the whole thing could’ve literally collapsed when he backed away. But I thought the picture had a lot of energy and mystery to it and a kind of seizing of life. And I thought to keep going. And then I came up with this idea in which my family emerged out of the ashes.”

Dinnerstein, who says he has never watched an episode of The Simpsons, met Simon in 2011 at a charity event at New York’s Rockefeller Center that was organized by Robin Quivers, Howard Stern’s sidekick. Quivers knew Simon because he had been a guest on Stern’s radio program on numerous occasions. She has two Dinnerstein pieces hanging in her home in New Jersey: a painting that depicts a large palette with a nude woman in the center and a drawing of a bowl of apples. At the benefit for a girls school in Eritrea at the Rainbow Room there were two dozen works by Dinnerstein on display and the artist’s daughter Simone, a prominent concert pianist, performed.
“Sam Simon was very supportive of anything I did charitably,” Quivers told ARTnews. Later, upon learning that Simon had commissioned the drawing, she advised Dinnerstein, “This is a Hollywood relationship. You ought to work faster.”
The drawing is titled Can the Universe Be Held in the Gaze of a Small Dog. It took Dinnerstein more than three years to complete it.
“I only work on one piece at a time,” he explained. “It’s a weird way to work.”
Although he declined to discuss the price of the commission, Dinnerstein said it was enough for him and his wife Renee to live on for “about two years.” Simon never saw the finished work. He died of colon cancer on March 8, the same day that a party was held at Dinnerstein’s Park Slope painting studio to celebrate the completion of the drawing, as well as the release of his daughter’s latest CD. The artist did not learn of Simon’s passing until the next day, when an obituary appeared on the website of The New York Times. The artist found the timing “eerie.”
Simone Dinnerstein said that her father’s decision to insert his family into the drawing initially felt “manufactured.”
“We didn’t have any relationship to the dogs,” she said. But she now looks back at it as a “weird foreshadowing.” A year ago she and her husband acquired a puppy, an Old English Sheepdog named Daisy, and as a result, her household has seriously plunged into “dog culture.” Two of Simon’s dogs appear in Dinnerstein’s drawing, an Italian Mastiff named Columbo and an Irish Wolfhound named Gertie, which was so huge that Dinnerstein likens it to a pony. The other dogs in the drawing are Stewart’s two Shitzus, Thelma and Louise, and her Poodle/Terrier mix, Cody.

Simon was devoted to the welfare of dogs and other animals, and committed a substantial portion of the great wealth he made from The Simpsons to protecting them. In 2002 he created the Sam Simon Foundation, which runs a six-acre facility in Malibu, where rescued dogs are retrained to assist disabled people, including soldiers who served in Iraq and Afghanistan. Simon also contributed to the Sea Shepherd Conservation Society, which opposes whale hunting. The group named one of its boats for him. And in 2013 People for the Ethical Treatment of Animals (PETA) named its Norfolk, Virginia headquarters the Sam Simon Center.
The drawing Simon commissioned was to hang in the entrance of his Pacific Palisades compound, according to Dinnerstein. If it had, the piece would have joined an impressive art collection there that includes one of the original casts of August Rodin’s The Thinker, paintings by Thomas Hart Benton and John Singer Sargent, and depictions of pin-up girls by Alberto Vargas and Gil Elvgren.
If Sam Simon was one of those larger-than-life Hollywood characters, perhaps it is only fitting that Dinnerstein substituted the Manhattan skyline for Simon’s likeness. The artist thought that the picture would breathe better “with more distance.”
Using pencil and graphite powder on laminated framing paper, Dinnerstein stood on a foot-high table while he worked on the skyline, referring to a large photograph on a nearby easel.


Dinnerstein considers the drawing one of his top ten works and compares it to his Fulbright Triptych because of the spatial composition of the piece, which will be on view in the exhibition “The Depth of the Surface,” opening at the National Academy in New York on June 4. “In the triptych, you see things up close, things you can take hold of, and then you go way out to that German landscape and in this piece you go out to New York City,” Dinnerstein said.
Because he had never drawn or painted animals before, the prominence of the five dogs in the drawing was a particular challenge.
“I wanted the animals to be equal to the people,” Dinnerstein said. “Their eyes, their consciousness…so they each had a personality.”
Pondering the half-completed drawing with its original cast of characters, Dinnerstein said, “It didn’t look like a commission. That was the ideal for me, that I didn’t look like I was sucking up to someone, that I was doing something that I could’ve done. If someone looked at it, they would’ve said, ‘This is yours.’ ”
To which Quivers added, “I think in the end it’s more his work now than it would’ve been if he completed it the way Sam wanted it.”