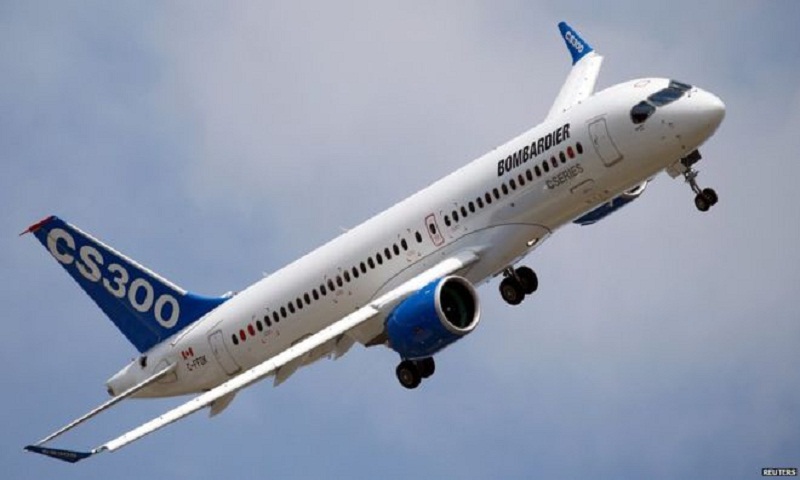 Parts of Bombardier's C-Series planes are made in Belfast

Thousands of aerospace jobs in the UK could be at risk after the US Department of Commerce ruled against Bombardier in a dispute with Boeing.

An interim tariff of 220% has been proposed on the import of Bombardier's C-Series jet to the US.

Boeing had complained Bombardier got unfair state subsidies from the UK and Canada, helping it win a major order.

Bombardier, which is one of Northern Ireland's largest employers, said it would fight the "absurd" ruling.

The UK Prime Minister's office tweeted it was "bitterly disappointed", but stressed the Government would continue to work with the company to protect "vital" jobs in Northern Ireland.

The Government and trade unions fear the imposition of tariffs could make Bombardier question remaining in Northern Ireland, where it employs 4,100 people in four locations.

About 1,000 jobs are linked to the C-Series, the wings of which are made at a purpose-built £520m factory at Queen's Island in Belfast.

The programme is not just important to Bombardier jobs in Belfast, but also 15 smaller aerospace firms in NI - and dozens more across the UK - which make components for the wings.

The ruling could potentially jeopardise a major order made last year from US airline Delta - a $5.6bn (£4.15bn) deal for up to 125 of the jets.

Bombardier said the decision was "divorced from the reality about the financing of multibillion dollar aircraft programmes".

The Canadian firm said Boeing was seeking to use US trade laws "to stifle competition".

The firm said it had created a "superior aircraft" that is more efficient and comfortable but Boeing was trying to prevent "US passengers from realising these benefits, irrespective of the harm that it would cause to the US aerospace industry and the cost to airlines and consumers".

But Boeing said the dispute was about "maintaining a level playing field", and said its aim was to make sure that "aerospace companies abide by trade agreements".

A UK government spokesperson from the Department for Business, Energy and Industrial Strategy said they were disappointed in the outcome, but emphasised it was "only the first step in the process".

"Boeing's position in this case is unjustified and frankly not what we would expect of a long-term partner to the UK - as well as damaging the wider global aerospace industry," they added.

US Secretary of Commerce Wilbur Ross said one reason for the tariff ruling was Bombardier's failure to cooperate with the investigation.

"The evidence we have to rely on is evidence not coming from Bombardier but evidence being proposed by Boeing and other outside parties," he said.

The US government was "not necessarily" targeting Bombardier's Northern Irish factory, he said, but added: "If you're building wings for a plane that doesn't get built, that's a problem."

Bombardier - which bought Short Brothers in 1989 - is one of Northern Ireland's largest employers.

The UK Government and Northern Ireland Executive pledged to invest almost £135m in the establishment of the C-Series manufacturing site.

The programme received £750m from Quebec's provincial government in 2015 when its fortunes appeared to be ailing.