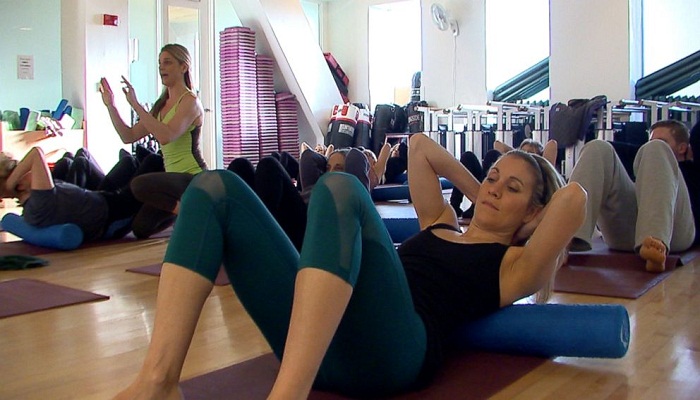 For Marisa Merliss, movement is life. A dancer and a fitness model, she has even starred in workout videos like the “Brazilian Butt Life.”
But like millions of Americans, Merliss is living in chronic pain, and after spending years of coping, she thinks she has finally found relief in a new body work system that targets our body's connective tissue, called the MELT Method.
Only in her 30s, Merliss has already endured seven surgeries for a variety of injuries, including having two vertebrate in her spin fused together and having a hip operation.
After the spinal surgery, she said, “It was heartbreaking to not be able to move, not just dance, but [not] be active for three to four years.”
Merliss said the pain first started when her dance partner dropped her during a routine.
“I was dropped during a lift,” she said. “I was lifted overhead with a partner; it just went awry. I fell on my tailbone almost 7 feet.”
To manage the pain, Merliss said she tried for years with different therapies, from physical therapy to weekly trips to a chiropractor, but found little relief.
“It is just really frustrating that I can’t break through that,” she said. “I would say most of the time I am in some degree of pain. If I am being really honest, I think about [the pain] throughout the day.”
She’s not alone. It’s estimated that over 100 million Americans suffer from chronic pain, costing almost $600 billion per year in health care expenses, lost wages and productivity, according to the American Academy of Pain Medicine.
Not to mention the psychological toll chronic pain has on sufferers.
“It affects everything,” Merliss said. “I just got married four months ago and it’s awesome... but there are certain things, like it’s 6 p.m., I shouldn't be exhausted, and we are supposed to go to dinner, but because of the pain I just want to be home lying in bed.”
Merliss said she doesn’t want to be reliant on painkillers, and after years of searching for relief, she decided to try something new called “the MELT Method.”
Developed by therapist and bestselling author Sue Hitzmann, the MELT Method is touted as a tantalizing new “pill free” pain relief, which works on the collective tissue, called the fascia, in the body.
“To MELT,” Hitzmann said, “means you are empowering yourself to get out of chronic pain,” and she says she is on the cusp of revolutionizing pain management.
Hitzmann said MELT works by stimulating the connective tissue in the body, manipulating pressure points in the fascia to loosen it up and reduce inflammation, which can reduce aches, pains and stiffness.
“If you compress or pull on connective tissue for short periods of time in very specific ways, you can re-hydrate it,” Hitzmann said. “That is one of the key parts of melt, how to juice back up the tissue, how to stimulate it and organize it.”
Hitzmann uses a variety of soft rollers and massage balls to target problem areas. After just one class and a one-on-one session with Hitzmann, Merliss said she had already started to feel a difference.
But some wonder if this method is really a placebo effect, or if it really has tapped into something.
"This is a relatively new area of research... not that many people are looking at the fascia and that needs to be looked at more." said Dr. Helene Langevin, the director of the Osher Center for Integrative Medicine at Brigham and Women’s Hospital in Boston. "[Fascia] literally forms a network in the body and connects everything with everything else. I think that is might play a role in the interface between body systems. We can have a better understanding of the body if we understand connective tissue better."