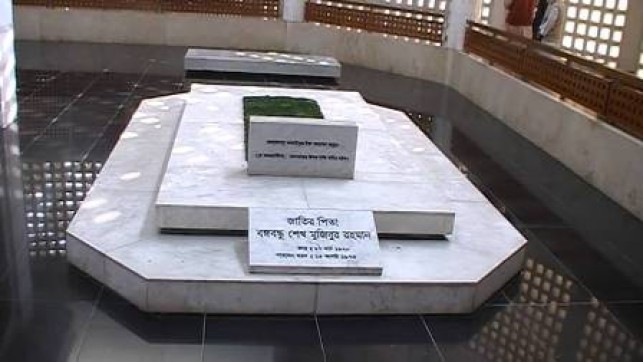 Prime Minister Sheikh Hasina will go to Tungipara of Gopalganj on Tuesday to pay homage to Father of the Nation Bangabandhu Sheikh Mujibur Rahman, marking his 42nd anniversary of martyrdom.

The Prime Minister will fly to the birthplace of the architect of the nation by a helicopter and place a wreath at his mazar and offer Fateha there, reports UNB.

She will also stand there in solemn silence for some time as a mark of profound respect to the memory of the architect of the independence.

The Prime Minister will then offer a munajat at the mazar seeking eternal peace of the departed souls of the Father of the Nation, Bangamata Begum Fazilatunnesa Mujib and other martyrs of August 15, 1975 massacre.

Earlier in the morning, President Abdul Hamid and Prime Minister Sheikh Hasina will place wreaths at the portrait of Father of the Nation Bangabandhu Sheikh Mujibur Rahman at Bangabandhu Museum in the capital.

A smartly turned out contingent of the Armed Forces will give a guard of honour to the portrait of the Bangabandhu. A special munajat and Fateha will also be offered there.

Later in the morning, Sheikh Hasina will place wreaths and offer fateha at the Banani graveyard for all family members of the Father of the Nation and others, who embraced martyrdom with Bangabandhu on August 15, 1975.

After the President, the Prime Minister and other dignitaries, people from all walks of life wearing black badges will throng the Bangabandhu Memorial Museum to pay their profound homage to Father of the Nation by placing wreaths at his portrait there.

After Asr prayers, Hasina will attend a milad mahfil to be organised by Bangladesh Mohila Awami League at Bangabandhu Bhaban.

The assassination of Bangabandhu and most of his family members on the fateful night of August 15, 1975 is the heinous chapter in the nation's history.

The self-confessed killers of August 15 did not assassinate Bangabandhu alone, but also killed 16 other members of his family, friends and relatives.