Population and Family Planning Programme: What We Achieved 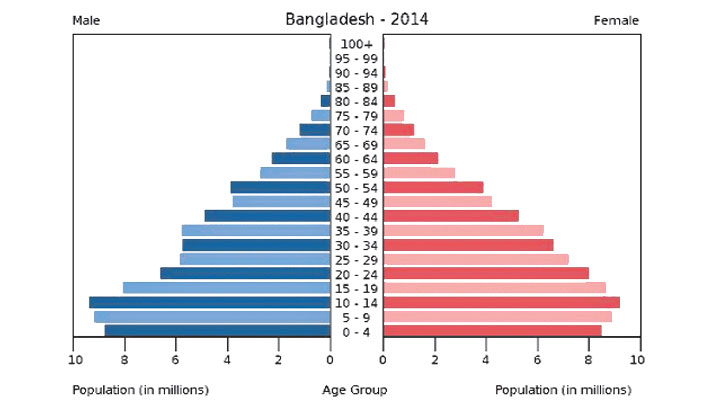 Since independence back in 1971, Bangladesh Population has grown from 75 million to almost 160 million today, more than a two-fold in 46 years. It’s a 113 per cent increase in less than half of a century. Surprisingly, last census (2011) experienced an increase of more than 20 per cent in a decade, from 2001 to 2011 which is higher than that of immediate past decade seen from 1991 to 2001 and it was 17 per cent in the last decade. With an area of 147,570 sq. km., this population load translates into an average population density of 1,070 persons per sq. km. (BDHS, 2014) which is one of the highest in the world. After the latest census in 2011, the population of Bangladesh estimated (2014) an increase by 8 million, with an annual increase of more than 2 million. The life expectancy at birth is 71 years, with women having slightly higher lifespan than men (72 years vs. 69 years).

Though the demographic indicators confirm Bangladesh is now being experiencing a demographic transition with the continuous decline trend of the natural growth rate is expected to lead to a small increase in coming decades. The latest census revealed the population growth rate in Bangladesh was 1.37 per cent. In comparison with other countries in the region, Bangladesh is an intermediate position between low-growth countries, such as Thailand, Sri Lanka and Myanmar and medium growth. In contrast, medium growth countries in the region are India and Malaysia (BBS 2011). The 2015 projections (medium variant) by the United Nations estimated that the population of Bangladesh in 2050 would be about 202 million (UN 2015).

Whatever the growth of the population occurred in Bangladesh in about half of a century, Bangladesh’s Family Planning Programme have had a tremendous role. As said by Peter Kim Streatfield, a renowned Demographer in one of his analytical papers back in 2013, the Family Planning (FP) programme and its role in reducing the fertility rate in the country has been at the centre of much scholarly debate. Through various international symposium and seminars, Bangladesh’s progress in FP movement has been cited as one of the role models to follow. Family Planning was introduced in Bangladesh (then East Pakistan) in the early 1950s through the voluntary efforts of social and medical workers. The government of Bangladesh, recognising the urgency of its goal to achieve moderate population growth, adopted family planning as a government sector programme.

The policy to reduce fertility rates has been repeatedly reaffirmed by the government of Bangladesh since the country’s independence in 1971. The first five-year plan (1973-78) emphasised the necessity of immediate adoption of drastic steps to slow down population growth. Beginning in 1972, the FP program received virtually unanimous, high-level political support. All subsequent governments have identified population control as a top priority for government action. The political commitment played a crucial role in the fertility decline in Bangladesh. In 1976, the government declared the rapid growth of the population as the country’s number one problem and adopted multi-sectoral FP programme along with National Population Policy. Population Planning was seen as an integral part of the total development process and was incorporated in the successive five-year plans.

Owing to intense efforts in the country to control the population growth, the total fertility rate (TFR) has been steadily reducing over the past almost four decades. From extremely high levels of 6.3 in 1975, to 3.3 in the year 2000, the TFR now stands as 2.3 according to the Bangladesh Demographic and Health Survey 2014, which is still some distant away from replacement fertility levels. According to an analysis done by the Population Reference Bureau (PRB) in 2003, even if Bangladesh reached replacement level fertility (whenever it reaches), population stabilization would take another 15 years, and the growth is being fuelled by the large young population of the country. PRB predicted the replacement level fertility by 2010 which did not take place.

If we further analyze, the TFR trend in the past, the 1980s saw a steep decline in TFR as mentioned above by the early 1990s.This was followed by a decade-long plateau which was the consequence of a ‘tempo effect’. The adoption of FP by Bangladeshi couples has always been after the first birth. The age at marriage did not change and there was no delay in age at first birth, and as such, no tempo effect was operating on first births. The 2004 Bangladesh Demographic and Health Survey (BDHS) showed the first nine per cent reduction in fertility (TFR of 3.3 to 3.0) for a decade. The 2011 BDHS confirmed a further decline in TFR to 2.3 children per woman but again it is stalled as survey result speaks of BDHS 2014, remained 2.3. Now, however, fertility levels are quite uneven - remarkably low in the west of the country (below replacement, on average) and worryingly high in the east (up to 1.5 children above replacement).

In order to attain any of the reasonable population estimates projected for mid-century (which range from 194 to 222 million) a substantial increase in the contraceptive prevalence rate (CPR) will be required in the next five years from its current CPR of 62 to 75 (mostly modern methods) by 2022 though the future intention as per BDHS surveys show the decreasing trends. This target could theoretically be achieved if all current unmet needs for FP (12% in 2011) are met.

There are a number of factors which influence future population growth. Bangladesh has considerable built-in population momentum because of high fertility in the past, and even with reduced fertility, many young women will pass through reproductive ages over the coming decades. For example, during the first decade of the 21st century, the number of women of reproductive age increased from around 32 million to 41 million as the children born in the higher fertility 1970s and early 1980s entered their childbearing years, according to UN estimates. This trend will continue for several decades.

There needs to be a demand for fertility limitation in order to reduce fertility in a non-coercive environment. The perceived value of children has long been recognised as being a determinant of desired family size. Historical demographic experience suggests that as recent investments in female primary and secondary education in Bangladesh manifest themselves in improved opportunities for formal sector employment for young women, parents will tend to favour smaller families, investing more per child in education-quality versus quantity. This trend will also be influenced by the saturation of the rural labour force and the fragmentation of agricultural land holdings such that there will be decreasing employment opportunities for unskilled workers.

From the figure above it is though clearly showed the decreasing trend of age-specific fertility rates but getting a huge mass in the youth age population also worrying. If they don’t get the job on time or get the opportunity to have the skills for future earnings, some of the social menaces will continue, like dropping out from the schools, early marriages will continue taking place, followed by early pregnancies. This vicious cycle will become the hindrances of our national programmes that contribute to continue fertility decline and population growth. Thereby, the replacement fertility level we won’t be getting as projected thus overall total population will continue to grow.

To echo an overview done by the south-east Asia regional programmes, the population growth of Bangladesh is fuelled by a) large base population, b) population momentum due to a large proportion of youths, and c) a stagnating CPR. While not much can be done about the ﬁrst two factors, a stagnating CPR is a cause for concern. While the government through its new HPNSDP plans to expand the contraceptive mix by specially promoting permanent methods, it should also think of fertility awareness based methods, such as long acting methods (LAM), which mimic traditional methods and may be more acceptable to users of traditional methods.

The other window of opportunity is the increasing levels of unmet need, though trend is decreasing but it is really slow in the country. This reﬂects that communication efforts for promoting family planning are working. Thus the government, with help from its non-governmental partners, should continue with its family planning messaging and counselling services and try and match the demand thus generated by ensuring availability of family planning services and supplies. It is hoped that the program’s special efforts to reach out to disadvantaged areas and communities will reduce the regional divide in the availability of services and result in a concomitant and balanced increase in CPR in all the divisions. Tailor-made programs need to be chalked out remembering ‘one-size-does-not-fit-all’. Separate focused programs for the youth folks, keeping regional variations in mind with the accessibility issues, including for haors, chars and hilly areas.

Bangladesh has a high adolescent fertility rate, one of the highest amongst the south-east Asia region nations. Early initiation of child bearing leads to rapid increases in population by not only lengthening the productive period in the woman’s life, but also by shortening the inter-generational span. As most of the adolescent child bearing occurs within the realm of marriage, it means that the law governing the age at marriage needs a much stricter reinforcement. It is heartening that through HPNSDP the government plans to make special efforts to reach out to adolescents with family planning messages and individual and community level counselling services. Convincing the adolescents to delay the ﬁrst pregnancy and child birth beyond the adolescent age frame will go a long way in bring TFR down to replacement levels.

The human resources issues such as insufficient training for health providers, inappropriate placement and personnel and inadequate supervision and the infrastructure in health sector are the key challenges that government is facing to improve the health and family planning services. HPNSDP plans to not only increase the number of trained service providers both at the community and facility levels, but also ensure their skill and capacity development through continuing in-service education and training. It also plans to improve coordination between public, private and NGO sectors, and thus hoping to increase coverage levels for various health services, including family planning services.

The writer is the Executive Director of Population Services and Training Centre (PSTC). He could be reached at: [email protected]