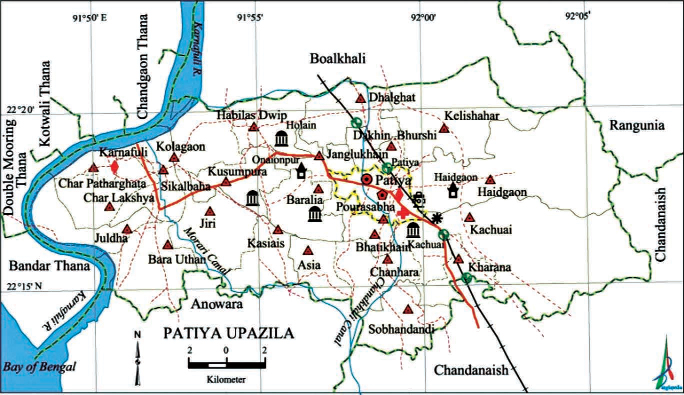 Patiya Upazila (Chittagong district) area 298.62 sq km, located in between 22’13’ and 22’21’ north latitudes and in between 91’47’ and 92’07’ east longitudes. It is bounded by Boalkhali upazila on the north, Chandanaish and Anowara upazilas on the south, Rangunia and Chandanaish upazilas on the east, Chandgaon, Bakalia, Kotwali, Double Mooring and Bandar Thanas on the west.

Historical events: In the 1930s revolutionary Swadesh Roy was shot dead by the British army, and wounded Debu Prashad, Rajat Sen and Manaranjan committed suicide to avoid arrest in the hands of the British. On 16 February 1933, many revolutionaries including mastarda surya sen and kalpana datta hided out in the residence of Khiroda Prova Biswas. During this time Surja Sen and Brajendra Sen were arrested by the British army. During the war of liberation in 1971 nearly 25 Pak soldiers were killed in an encounter with the freedom fighters at Dhalghat. The freedom fighters under Capt. Karim raided the Dhalghat police outpost and forced the police personnel to surrender. The freedom fighters launched’ attacks on the razakar camps at Patiya Madrasa and at the camp near Khanmohona station in which two razakars were killed; they also killed another razakar at Goplal Para of Kelishahar. A number of civilians were killed and wounded as a result of bombing for a number of times from two Pak aircrafts. On 3 May, the Pak soldiers conducted indiscriminate killing at village Muzaffarabad; they also set many houses of this village on fire. Patiya was liberated on 14 December.