Vatican turns off fountains as Rome gasps in drought 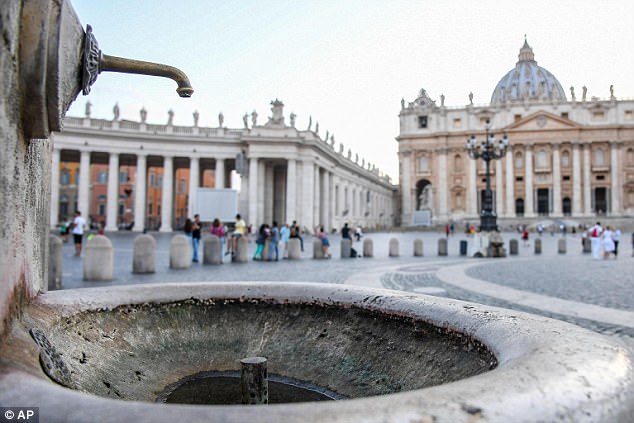 The Vatican has turned off around 100 fountains due to a prolonged drought starving Rome of water. Pictured: St Peter's Square at the Vatican(Photo: AP)

Vatican authorities began on Monday to turn off some 100 fountains, including two Baroque masterpieces in St. Peter's Square, due to a prolonged drought affecting the tiny city state and the city of Rome which surrounds it, reports The Times of India.

Vatican spokesman Greg Burke said it was the first time authorities in the spiritual home of the world's 1.2 billion Catholics could remember being forced to turn off the fountains.

"This is the Vatican's way of living solidarity with Rome, trying to help Rome get through this crisis," he told Reuters TV.

All 100 Vatican fountains will be turned off gradually over the coming days.

Rome is gasping after 72 per cent less rain than normal fell in July, according to Sky Italia's weather TV channel. There was 74 per cent less than normal in June, and a 56 per cent reduction from the long-term average across March, April and May.

If you''re close to God, and can appoint "Saints", can''t you make it rain?... just saying.billetdoux

Caring for the planet and its resources is an important issue for Pope Francis, who demanded swift action by world leaders in the first ever papal document dedicated to the environment.

"This decision is very much in line with the pope's thinking on ecology: you can't waste and sometimes you have to be willing to make a sacrifice," Burke said.